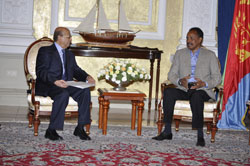 During the meeting at the State Palace, the Yemeni official delivered a message to President Isaias from President Ali Abdalla Saleh of Yemen.

Dr. Abubaker Abdalla Al-Khurbi told ERINA that the message concerns the special relations existing between Eritrea and Yemen. He further explained that it highlights the need for fostering cooperation and coordination on the part of the two sisterly counties at a time when a number of countries in the region are becoming victims of external interference and the negative impact resulting from such a scenario.

The Yemeni Foreign Minister further stated that the mechanism for the implementation of the previously concluded agreements between the two countries would be discussed when both Presidents hold a meeting.