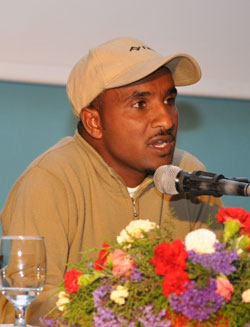 It is commonly mentioned that Eritrea has potential in athletics, cycling and football. The popularity of volleyball especially in the mid-1990s showed that it was among the highly favored and practiced sports in the country. Though it is hard to find documentation when volleyball was first introduced in Eritrea, it is believed that it was started during the Ethiopian colonial period and later on it was introduced in schools as part of the physical education course in the late 60s and early 70s. Its popularity was limited among the military camps and among students of junior and high schools. There were no national or international tournaments during that time. It is also said that volleyball was played in Assab and the surrounding coastal areas, especially among the Afar people. Yet, its advancement considering its fan base in the country has not been encouraging. Shabait conducted an interview with Mr. Tahir Ibrahim, the president of the Eritrean National Federation of Volleyball regarding the efforts to develop the sport in Eritrea.

Let’s start with the general status of volleyball in the country?

Following independence, the Sports Commission was engaged in organizing tournaments of both sexes in six regions, such as annual competitions, festivals by the Ministry of Education, during the semester breaks and summer vacation. This has greatly contributed for the development and popularity of volleyball among Eritrean youth. A number of clubs were established in the capital city of Asmara, and the games conducted were highly competitive and entertaining to fans. The student games among various schools were also equally loved. However, its development was hampered due to some constraints.

What can you tell us about the Eritrean National Federation of Volleyball?

The federation was formed as an independent organization after the restructuring of the Sports Commission in 2003. We have eight volunteer staff members. The federation has been striving to outline plans that could promote volleyball through arranging national tournaments, knockout games on different occasions. We were able to organize national tournament this year, in which clubs from all regions including from the Ministry of Defense participated. The branches of the federation in other regions are responsible for organizing local games and forming clubs.

Has the national volleyball team ever taken part in international tournaments?

It has participated in a couple of tournaments such as in Kenya and Sudan few years back. Last year, we were planning to participate in the Youth Olympic Games in Singapore, unfortunately due to some problems we were unable to go. However, we will work hard to participate in international games in the near future.

Tell us same of the main challenges in the promotion of volleyball?

Although it is favored among many sport lovers, its development is limited to certain areas. This could be due to lack of appropriate infrastructure and limited budget.  Volleyball should be given equal attention as other sports. Because, I believe we could succeed in this field of sport if we put effort in reviving it. Somehow, right now it is flourishing in different areas of the Southern Red Sea Region as volleyball was practiced in the area longtime ago. We need to expand its popularity outside Asmara and put in place the needed infrastructure, especially the construction of indoor courts that could also serve for other kind of sports. This would also enable us to host international tournaments.

What plans are there to revive this game again?

We have plans to strengthen relations with the Federation of International Volleyball (FIVB). We will work in the development of mini-volleyball with the collaboration of FIVB, besides providing training courses to coaches. We are planning to promote volleyball games in schools in collaboration with the Ministry of Education. Considering the coastal areas we have, we would work focusing on arranging local and international beach volleyball games. Last year, beach volleyball games were carried out, and similar games were hosted in February this year by the Northern Red Sea region in commemoration of Operation Fenkil. All regions were able to take part and it has a promising future. Besides this kind of sport is gaining popularly all over Africa, and we could take advantage of the growing trend using the vast coastal areas we have.

You have participated in the 32nd Congress of the FIVB, tell us more about it?

This congress, hosted in September in Rome, Italy, was aimed at discussing the development of volleyball among the overall members of FIVB. A new development fund project was adopted from which members could benefit. Eritrean participation in the congress was important so as to use the opportunities provided, share experience and strengthen its relations with other partners.