The Value of the Deceased 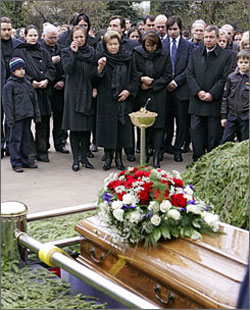 He was crying, weeping and at the same time screaming all kinds of words in appreciation of the deceased. Though all of us were weeping and grieving, this guy seemed to attract the attention of all the mourners at the funeral. According to the custom we went to the house of the deceased after the funeral and here the guy was shouting all the good things he had done together with the deceased. I was a bit confused because I knew the deceased well for some years and had not seen or heard about this person who was claiming to be a very good friend of the deceased.

After a few days, I returned to the house of my deceased friend and since I was curious about the guy I deliberately sat beside the sister of the deceased and began asking rather interrogating. She then told me that they were indeed childhood friends but they had a fight some years ago and grew apart. I also tried to investigate the source of their fight but the sister was no help. Continuing my interrogation, I asked her whether this friend knew the deceased was hospitalized for the past six months. She said they still had some common friends and it was unlikely that he couldn’t have heard about his illness. And I began to wonder why someone would mourn this much when practically speaking it is insincere? I mean death is sad thing for anyone but you can’t pretend like you have lost a dearly beloved one when the reality is quite the contrary.

After the encounter with the guy and the explanation of the sister I was left alone to my thoughts and began to ponder why people tend to appreciate the dead when they had not even cared to visit them during their illness. When we had no attachment whatsoever for a while, when we had an irreconcilable argument and said many bad things, why the appreciation and kindness and caring after that particular person stops breathing. Many of us tend to remember all the good things about a person after death even if we had no or strained relations with him/her.

This just did not happen in my friend’s case, it is a common experience everywhere. Take the example of Micheal Jackson. He had been accused of child molestation and abuse and this had done a serious damage to his reputation and career but now it seems that everyone is saying that now that he is not here to either be accused or charged, let’s remember the good old days.

Some would say that appreciating the dead is related to wanting what you can’t have and since the deceased are inaccessible we tend to remember them with virtues even if they don’t posses those virtues. Others also say that it is because we take them for granted and once we lose them, we try to appreciate them and be left only with only the good memories.

Despite the fact that we have enough reasons and explanations as to why we appreciate the deceased, why not appreciate them when they are still alive, express our love and admiration when the other party still can hear, see and feel it and reciprocate. And the worst part is we never seem to learn from our past mistakes. I am sure that those of us who do appreciate the deceased have seen enough deaths in our life but still we repeat the same routine over and over.

Even those who criticize such behaviors seem to do the same things and it left me to question whether I do that myself. Don’t get me wrong, I don’t mean to say that we don’t have to pay our respect to the deceased and the family of the deceased for old time’s sake even if there is some gap. What I mean is do we have to mourn and weep more when we were not even bothered to be there for the person during his/her trouble. When there is no attachment to the person, are we really weeping because we lost that person, if so we have lost the person long before and how could you be so sad about someone who wasn’t there in your life. We even tend to mention the kind deeds of the person when in reality, we have been libeling the person like some kind of monster and the minute we hear that he is no more we shift gears and say all good things. We know that he/she can’t hear it and nothing is going to change but still we praise the dead.

I would say, let us do what is expected from us, and then even if we lose a friend let us not pretend that he or she means more to us because deep down we know that it is not true. Do we really have to be dead to appreciate or be appreciated? I say we have to do it while we have the chance and start doing it now.