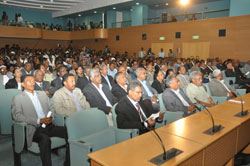 Musica libi eyu, a song performed during the opening of the National Conference of Eritrean Music and Dance highlights that music is well-matched to the heart’s pulse. Music in the Eritrean context has indeed its uniqueness and has influenced the people in a number of ways. Similar to Leo Tolstoy’s expression: “Music is the shorthand of emotion,” its diverse and imminent impact in our day-to-day lives helps us stay mentally and physically tuned and transcends us out of the ordinary. It is a good companion and indispensable part of the socio-economic and political situation of the Eritrean society.

In many ways, music helped in alleviating the stress every national during the colonial era.  It became a perfect means of communication; transcending language and expressing what couldn’t be said explicitly or at the same time held back. Since long it has been a good tool to express varied feelings well-agreed to time and context. There was almost nothing that music could not raise and as well quell.   It has since long been a means of voicing pride and accomplishments of the armed struggle and also an effective mode to defy ploys of enemies. It has been a good companion and pragmatic vehicle that has been accelerating the nation building process for it lightens the workload by refreshing the spirit of the people.  Besides instructing and delighting the audience, music also satisfies the creative drive of the people who are involved in musical activities.

Eritrea is very rich in cultural diversity which resulted in an immense variety of beats and an enviable wealth of choreography. It is to asses the strong and weak aspects of Eritrea’s music and choreography, the arrangement and harmonization of music instruments, beats and rhythms, orchestration as well as concord between playing an instrument and the vocal range of a singer that Eritrea’s Association of Musicians held the conference from 20-21 October at Asmara Palace Hotel.

In the opening of the conference in which high-ranking government officials, veteran musicians who have been active in music carrier, newly emerging musicians, professionals in varied areas of music, poets, dancers and artists, and invited guests took part, the hall was filled with a vibrant live music concert that pleased the audience’s senses. Estifanos Abraham’s song musica libi eyu was a very timely song, its content solely devoted to highlight the significance of music in making the audience’s heartbeat tune with the music. The effect of the instrumentals composed by Barnabas Mebrahtu and Mohammed Saleh in making and cheering the audience was likewise highly impressive. The live co

Emphasizing that music is a soul food owing to the musical performances presented in the inaugural ceremony of the conference, President Isaias stressed the need to exert more efforts to enhance music and thereby encourage the professionals in the industry.

Musicians employ imageries, personifications, metaphors, coined new words to avoid the dullness of expressions and other figures of speech to convey messages and reach a vast number of audiences. Shigey habuni roughly translated as deliver me the torch- meaning the light of independence- is a good metaphor that epitomizes the thirst for independence. Likewise, in the early days of independence many songs that reflect the euphoria state of the hard-won independence were produced.  Many have been reminders of the responsibility we shouldered to safeguard and build the nation.

Eritrea’s folk dances are often highly expressive. Choreography is not subordinate to music, however, is self-sufficient to present book-length stories in a few minutes. Through mimes the folk dancers give a dramatic sense to the music and enable the chorographers narrate concrete stories. In a paper he presented at the conference, Hermon Hagos introduced the participants to varied dance performances practiced in the nine ethnic groups. He said that Eritrea’s folk dance have been advancing with the change of living standards of societies, however, he emphasized that it has not yet been adequately researched. This being the situation only a few of the colorful folk dances have been showcased in occasions such as the national festival at the expo grounds.

The conference provided a perfect platform to discuss varied areas of music. It highlighted the present situation of Eritrea’s music both the traditional and modern music and especially the buoyant development of music in three generations that stretched from early 1960s to the present. The deliberations also pinpointed the requisite to improving musical activities and giving special focus to keeping intact the originality of tradition both in music and dances and researching properly the traditional musical instruments that have been fading.

A paper discussing the arrangement of music criticized musicians for the inclination of solely depending on assistive technology rather than proper utilizations of real musical instruments. Fitsum Yohannes stated that poor cord progression have been affecting the taste of music and that traditional music instruments have not been utilized to play their due role. Whether the role of drum machine has been vital or the other way round was also a center of the discussion. Many of the participants agreed that drum machine has been diminishing the quality of music that could have come out of the drum set.

Significance of vocal talent and the capability to technically enhance it was also another area in which the presented papers focused on. “Singing in the disguise of pitch tuning applications can only hinder a musician from making maximum use of the natural voice,” said Barnabas Mebrahtu.
As regards Eritrea’s music from the audience’s point of view, Mohammed Saleh, who got a chance to introduce the local music while he was studying music in China said that the varied traditional beats have gained international appeal though it still needs to be enhanced through intensive research to  its highest level of  maturity.
The conference’s primary conclusion was to “play the music, not the instrument.”