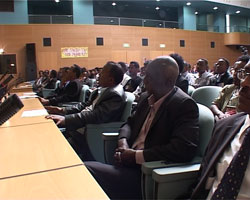 During the congress, it was disclosed that traditional and modern music has been making due contribution for a long time in organizing musicians in associations. The role of music in the history of armed struggle was also highlighted.

The Eritrean Music Association has been engaged in strengthening its organization from 1996 until now both inside the country and broad, enhancing awareness of the association, upgrading the capacity of musicians, addressing copyright issues, fostering international relations and conducting researches, among others.

The participants held extensive discussions on reports presented, and elected a committee with 12 members. They also adopted recommendations including providing training courses to the members and strengthening coordination.

Also, the National Confederation of Eritrean Workers and the cultural affairs department of the Ministry of Education conveyed a message of solidarity during the meeting.

The Eritrean Music Association has over 200 members.