Eritrean nationals in Washington D.C. reiterate readiness to live up to the nation’s expectations 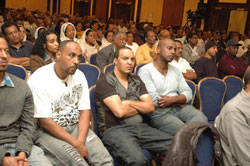 During a 3rd public mekete they conducted on October 24, the nationals assessed the activities carried out and decided to continue them with added vigor.

In briefings he gave at the meeting on the objective situation in the Homeland, the Eritrean Ambassador to the US, Mr. Girmai Gebremariam, pointed out that solid ground has been laid to achieve food security and ensure economic emancipation thanks to the multifaceted programs being implemented through the coordinated endeavors of the Government, people and members of the Defense force. The contribution being made by Eritrean citizens in the Diaspora to reinforce such a drive constitutes a pride to the nation, and as such they should step it up through strengthening unity.

The Chairperson of the Resolute Rebuff Committee in Washington D.C. and its environs, Ms. Freweini Tekeste, on her part outlined the tasks accomplished previously and future action programs. She further indicated that the resolute rebuff would continue with added strength.

A number of Eritrean intellectuals also gave lectures at the meeting focusing on the progress registered in the health and education sectors in the Homeland.

Lauding the achievements registered in the national development drive, the participants of the meeting voiced commitment to live up to the nation’s expectations.

Ti’o semi-urban center in the process of speedy urbanization