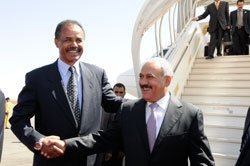 On arrival at Asmara International Airport in the morning hours, the Yemeni leader was accorded warm welcome by President Isaias Afwerki. In a meeting they held at the State Palace, the two leaders conducted discussion on bilateral relations and cooperation of partnership, as well as the developments and objective situation in the region in general and that of Somalia and the security of the Red Sea in particular.

At a press conference following the meeting, President Ali Abdalla Saleh said that both countries share similar views and stance as regards the agenda items set for discussion in the meeting with President Isaias. He further expressed readiness to strengthen and enhance Eritrean-Yemeni relations and cooperation of partnership in various domains, besides properly harnessing the available opportunities.

“The latest meeting creates conducive ground for the benefit of the peoples of both Eritrea and Yemen, in addition to ensuring security and stability in the region,” the Yemeni leader declared.

He further pointed out that the two Presidents underlined the significance of fostering coordination between Eritrea and Yemen in particular and among countries in the region in particular so as to bring about peace and stability in Somalia and in order that the brotherly people of Somalia may achieve the reconstitution of their nation along with viable national institutions.

Likewise, President Isaias noted that the strategic relations between Eritrea and Yemen does not need elucidation. The President went on to say that understanding has been reached to map out method of implementation in detail on the part of officials of both countries with a view to facilitating the practical implementation of existing opportunities and investment programs for the economic benefit of the two countries and peoples.

President Ali Abdalla Saleh was seen off on departure for home in the afternoon hours concluding a one-day working visit to Eritrea.

Eritrean nationals in Washington D.C. reiterate readiness to live up to the nation’s expectations

Building complexes under construction in Gahtelai