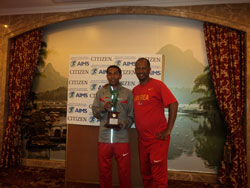 He is the reason Eritrea became a familiar name in the world of international athletics. Olympian Athlete Zersenay Tadesse is listed as one of the top ten runners in the world.  His reputation and victory is still flourishing in men’s in half-marathon race. Zersenay was awarded the prestigious Association of International Marathon and Distance Races (AIMS) World’s Fastest Time in recent history. This was in recognition of his world-record breaking performance during the Lisbon Half Marathon early this year.  Zersenay’s time of 58:23 on 21 March 2010 broke the previous men’s half marathon world record. He was determined to maintain the title in the World Half-Marathon Championships in Nanning, China for fifth time, when his muscle contracted suddenly. Shabait conducted an interview with Zersenay and Coach Aklilu Mogos, a seasoned trainer in long and half-marathon races, regarding Zersenay’s general condition and the over all-development of athletics in Eritrea.

Let’s start with the championship race in Nanning?

Zersenay: We were well prepared for the race, and I was determined to maintain the title for the fifth time. Unfortunately, I started feeling pain in my left leg at 14kms of the race. I decided to finish the game no matter what happens, because if I were to withdraw we would have failed at national level, so I chose to continue.  I came second and also we were able to rank second at national level.

Mr. Aklilu, what were your thoughts when you saw Zersenay go on with the race despite his injury?

Aklilu: I was following the game via television and I was confident that he would triumph in this race just as he did in the past. But when I saw him running in pain, I grew anxious. I wished I could tell him to quit considering the damage it might cause in the future. The injury could have indeed caused permanent damage to his leg, and when he stepped on the last finishing line he was in a bad shape. His determination was very much admirable but this was not the last game that we would need him. He was a leader for the national team and thanks to him Eritrea was able to stand second at national level.

What is the secret behind your success?

Zersenay: I believe that a person should make the necessary preparation for any eventuality and I am always serious in my endeavors. I make utmost efforts to use the talent I am blessed with and try to focus wholeheartedly on the vision I have set in my mind.

What do you think makes him different from other runners?

Aklilu: Zersenay never underestimates his competitors, he always makes himself ready. His determination and focus has enabled him to achieve this success. He has a natural talent which was obvious from the beginning. Zersenay is also highly disciplined and makes use of every opportunity that comes his way.

Which tournament was the toughest for you, Zersenay?

Zersenay: Defeating 20 Kenyan athletes and break the world record in 20km and 21 km races was not an easy task. Most of them were exhausted after 3km and I was leading the race for 15km and able to set a new record. Winning the bronze medal in world Olympic game in 2004 was also one of the toughest races in my experience.

What can you say about the development of athletics in Eritrea?

Zersenay: We are improving our status and many athletes are performing commendably in various tournaments. The putting in place of track field in Asmara Stadium was important in pushing forward athletics in Eritrea. We athletes do not have a reason to lag behind our neighbors in any contest since the necessary infrastructure has been made available. Moreover, the landscape and climate in our country enables us to prepare ourselves for any competition. I feel great joy to see around 500 runners from all parts of the country exercising in Asmara stadium.

Aklilu: We do have potential. The country is endowed with a variety of landscape and climate that could effectively prepare our athletes. I can say that we have progressed in road running and need to work on track and field, as well as cross country running. We have talented athletes of both sexes and we need to organize competitions to bring forth their hidden talents. We are planning to organize tournaments as much as possible and further strengthen our clubs.

What is your opinion about Zersenay’s influence on the country’s young and aspiring athletes?

Aklilu: In the recent races he participated such as in Nanning, Zersenay shined Eritrean name among a country of 1.3 billion people, and around 50 TV channels in China approached him for an interview. Also in Brazil, he was a pride not only for Eritrea but at the same for the whole African continent. I remember when I was participating in the international games, most of the time the people knew Eritrea either through the long armed struggle or never heard of Eritrea’s name. But, now with each of Zersenay’s victories, Eritrea’s name is more recognized. Here also he is a respected public figure and an inspiration for many young athletes to strive for their dreams.

Do you believe that there would be others to take your place in the future?

Zersenay: Yes, definitely. There is no problem in finding talented athletes that could continue in this tradition.

What do you want to say to Eritreans residing abroad?

Aklilu: Eritrean nationals have special attachment with their Homeland. They travel for long distance to give support to Eritrean national teams and are always ready to extend their assistance. Their gestures are more than words can explain.

Zersenay: I can’t even begin to express my appreciation to Eritreans for their constant support. I know that they are concerned about my injury in the Nanning, but now I want to tell them that I am recovering. I am confident my team would score excellent results in coming competitions.