Eritrea’s Music From The Perspective Of Musicians 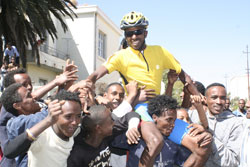 The principal objective of Eritrea’s Music Association is cultural preservation and enrichment as well as actual presentation of varied cultural activities. Last week it held a conference on Eritrea’s music and dance and conducted extensive discussions. But how do musicians who took part in the conference view Eritrea’s music?

Bereket Mengsteab, a veteran musician, who has been engaged in the profession for almost 6o years, expresses his contentment with the newly emerging and flourishing young artists. He said: “These young musicians represent the country’s future in music. We are very much pleased to bequeath the cultural heritages to them. And of course we expect them to properly carryout their responsibility. In response to the question whether there has ever been a period of poor productions in Eritrea’s music industry since the 1960s, Mr. Bereket said: “As for me, Eritrea’s music is advancing and I am very much assured that it would keep advancing evermore.” As regards the impact of the conference on music and choreography he said that constructive discussions were held on what was accomplished, what has been accomplished and what remains in the development of Eritrea’s music industry.

A prominent singer since the period of armed struggle, Estifanos Abraha- also known as Zemach- said that pitch tuner machine is very misleading. However, he indicates its significance in bringing about temporary solutions.

Zemach stressed that as a musician, it is only in hasty conditions that he used technological embellishments. Otherwise, he said: “I am against such practices. Pitch tuning technologies should not be used at all, but rather musicians need to exert concerted efforts to empower the natural talents to its utmost realm of excellence for performing live shows is reflecting one’s natural talent.”

Mohamedsaleh Husien, who studied music in China for four years, is now a music teacher in Asmara music school. He said that Eritrea has rich cultural heritages in terms of traditional music. This being the fact, he pointed out that the nation’s traditional music potential has not yet been properly exploited. Despite the cultural endowment at our disposal, concerted actions have not been taken to popularize the culture. Local artists have been showing inclination towards modern music. Notwithstanding such inclinations, however, individual initiatives that could enhance the quest towards proper reflection of Eritrea’s culture have been underway. “I only took preliminary initiatives in composing traditional music,” he said.

Timeless works of music were produced in the 1960s. Likewise, very enthralling as well as very moving songs were also produced in the times of the armed struggle. The merit of such productions lies not on the sophistication of instruments but on the dedication, unembellished talent of the artists, and most importantly on the culture of team work.

According to Mr. Estifanos, it was the good organizational capacity that enabled them to produce good works even with musical instruments of poor qualities. As there existed sprit of competitiveness, he said that it was imperative to present unique performance. “I recall that there were musicians who used to be exhausted to sleep in conducting trainings. Lack of the necessary musical instruments prompted us to become creative to modify the required musical equipments,” he added.

Among the papers presented in the conference discussed about the impact of assistive technologies on music. Zemach’s opinion is that, technological advancement has both constructive and destructive effects.  It negatively cultivates dependency on artificiality and the positive impact is, it enables musicians transcribe musical notations at ease.

Sbrit cultural troupe has been playing the leading role in reflecting Eritrea’s culture. Mr. Mohamed Salih’s opinion is that though making due contributions, Sbrit, has not fully portrayed the true picture of the nation’s tradition. As regards the remedial solution he suggested, young folk dancers and traditional musicians need to be identified at the grassroots level. “We are rich in drumbeats, and the variations in rhythms. Our music has been so far appreciated for its uniqueness and originality; once our culture is fully projected undoubtedly there would be much international admiration,” he emphasized.

It is a common opinion of the three musicians that Eritrea’s music is staidly flourishing, but still much more training in music remains a necessary requisite.

Building complexes under construction in Gahtelai