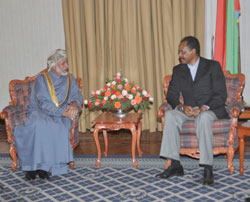 In the meeting, the Foreign Minister delivered a message from the Omani leader Sultan Kabus Bin Seid to President Isaias.

During discussion focusing on enhancing bilateral relations, President Isaias commended the unique and successful experience of Oman under the leadership of Sultan Kabus Bin Seid.  The two sides also held talks on the prevailing situation in the Horn of Africa in general and that of Somalia in particular.

The Omani official told ERINA following the discussion that the meeting aimed at taking initial steps for developing Eritrean-Omani relations, as well as outlining priorities to this end. Mr. Yosuf Bin Alewi further stated that an understanding has been reached for an Eritrean government delegation to conduct meetings in Oman for reinforcing bilateral ties.

The  Omani Foreign Minister went on to assert that there exists desire on the part of both sides to exchange information and mutual support with a view to achieving a peaceful and lasting solution to the Somali issue and in order that the brotherly people of Somalia may ensure the reconstitution of their nation.