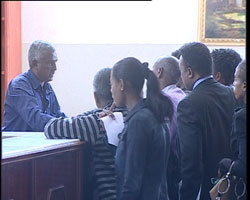 Beneficiaries called on the Public Census Office to find a solution for the delays and inefficient services on issues of social rehabilitation and burial sites.

Asmara, 31 October 2010 – Beneficiaries called on the Public Census Office to find a solution for the delays and inefficient services on issues of social rehabilitation and burial sites.

Indicating that the services of the office are crucial in facilitating various social requirements, the beneficiaries stated that the time wasted during delays is adversely affecting social issues that require speedy services.

Mr. Ahmed Mohammed Birhan, one of the beneficiaries, said that he came to the office for more than a week due to some technical problems the office had faced and has yet to receive any services.

The head of the Public Census office in the Administration of the Central region, Mr. Tesfamichael  Tesfalidet stated that the office caters to about 150-200 customers per day, and although it is possible for technical problems to happen, the main cause for the delays is incomplete documents on the part of the beneficiaries.

Mr. Tesfamichael further said that people’s awareness regarding the office is limited and reminded the public at large to have the necessary documents on time.

The Public Census Office is a government institution that provides legal documents on issues such as social rehabilitation, birth and death certificates, citizenship, marriage license and other issues.

Forest Areas in Mensura Sub Zone In Need Of Attention