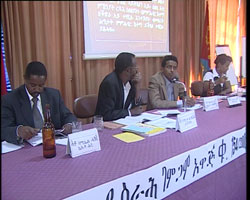 In a speech he delivered at the meeting, the Minister of Transport and Communication, Mr. Woldemichael Abraha, noted that the road traffic proclamation prioritizes safety concerns to all vehicles, pedestrians and other means of transport. He also said that the proclamation would play a significant role in promoting socio-economic activities and expedite national development endeavors.

Indicating that commendable achievements have been registered since the implementation of the road traffic proclamation, the Minister highlighted the need to prepare traffic regulations in a way that could have relevance to national development.

A report was presented regarding the improved road traffic proclamation in the workshop by the police department, Ministry of Justice, and the department of land transport and the National Insurance Corporation of Eritrea (NICE).

The participants of the workshop on their part held extensive discussions and adopted a number of resolutions and recommendations.

The Director General of the Land Transport in the Ministry of Transport and Communications, Ms. Senait Lijam, expressed conviction that the new Road Traffic proclamation will play a crucial role in reducing traffic accidents.