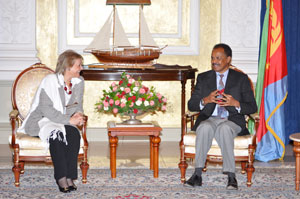 In the meeting, which is a continuation of the one conducted last May between Presidents Isaias and Hosni Mubarak, the two sides conducted discussion on enhancing trade and investment, as well as banking services between Eritrea and Egypt, in addition to exchanging views on ways of developing cooperation in fishery resource investment through reinforcing the existing cooperation of partnership between the two countries.

Both sides also reached understanding on the significance of setting up a body entrusted with the task of effectively supervising the implementation of the agreements.

Dr. Faiza Abuneja told ERINA following the meeting that the discussion with President Isaias aimed at strengthening the historical Eritrean-Egyptian relations, besides securing benefit from the existing free trade among member states of COMESA.

Noting that the two sides also conducted discussion on developing the fisheries sector and its funding, she indicated that in accordance with the directives given by Presidents Isaias and Mubarak,  implementing agencies and ministries of both countries have been instructed to closely follow up the issues on which consultations have already taken place and understanding reached.

Likewise, the Egyptian Minister of Agriculture and Land, Eng. Amin Abaza, stated that there exist ample cooperation opportunities between Eritrea and Egypt, beginning with the fisheries resource and proceeding to agricultural production.