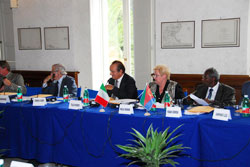 Two separate  conferences were conducted in the Italian cities of Rome and Naples focusing on exploring ways of fostering cooperation between Eritrea and Italy.

Asmara, 3 November 2010 – Two separate  conferences were conducted in the Italian cities of Rome and Naples focusing on exploring ways of fostering cooperation between Eritrea and Italy.

Noting that working in partnership with Italy is imperative for the development of the Eritrean economy, he pointed out that the Eritrean government is working jointly with the Italian government towards enhancing the historical ties between the two countries. Mr. Yemane further called on the concerned Italian bodies to encourage investors engage in investment ventures in Eritrea, besides boosting trade exchange between both countries.

The head of the Eritrean National Museum, Dr. Yosef Libsekal, said on his part that Eritrea is endowed with rich historical and relics potentials. There exist artifacts in Eritrea attesting to the pre-Aksumite civilization period.

University lecturers, investors and heads of the Italian Trade Office attended the congress, during which they shared their views and experience.

Also in a separate conference held in Naples city on October 29 under the title “Experience of Italian-Eritrean Cooperation,” Italian experts gave briefings on the experience of economic cooperation between the two countries.

Likewise, Dr. Yemane Misgina from the Halhale College of Business and Economics, and Dr. Tekeste Melake from the College of Arts and Social Science presented detailed study papers focusing on the Eritrean history from the Italian colonial period until the achievement of independence, as well as political and economic choices of the Eritrean government in the on-going endeavors to achieve food security on the basis of economic liberation.

Similarly, the Director General of Desks in the Foreign Ministry, Ambassador Fisehatsion Petros, gave briefings on Eritrean-Italian cooperation in the domains of diplomacy and economy.