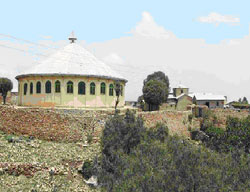 In one traditional song of Tigrigna, I have  heard a verse which clearly postulates that the singer had a golden opportunity to see dancers from the vast lands of the eastern escarpment from the southern region and far areas of the Northern Red Sea in one course of time parked on the tip of Bizen Monastery. This most renowned Christian shrine in Eritrea is among the well crowned centers of spiritually colored places of tourist attractions similar to its prominent location. After I had got the required papers from the Department of Antiquities and Preservation at the Patriarchate of the Coptic Orthodox here in Asmara which is credited with administrating the over twenty monasteries, directly, I headed to Bizen Monastery.

With great anticipation to observe the undiscovered phantoms of this monastery which was founded by Abune Phillipos in 1368 A.D, I started my way escorted by the eye-capturing panorama Asmara has in the dawn hours. Riding less quietly my bicycle, I passed the Crematorium and graveyard of the common wealth soldiers which are attractively bordered by different fl ora situated the Biet Ghiorghis Zoo inside their charming umbrella.

Soon, the mesmerizing road of Asmara claimed a brave heart when I want to drive on the sharply folded cliffs. While listening to my favorite program of the Voice of the Mass, after thirty seven minutes, Nefasit stretched its hand to accord new vista for any stranger. The houses of this picturesque town bear a resemblance to well portrayed painting of one artist which is not easily credible to absorb that it is a town of multi-colorful scenes where different lifestyles mixes are well preserved. When I got my foot hold to won over the laborious solid road which mounts high and difficult to climb as you leveled your paces, I directly remembered my diary in which I have many stabbing and ecstatic events of life. One of the staff reporters to Eritrean Horizons in 1996 went on to say that “as you climb higher up the stark, eerie cliffs, you feel that the Holy Grail of an Arthurian romance, the Ark of the Covenant or some revelation must exist for the weary pilgrim at the end of this road.” On the bed of this monastery, I read one word of precaution which is written on large stone and was saying that ‘it is completely prohibited for girls to go up from that marked place.’ Even though I had once observed females to entreat stood there during the funeral ceremony of the ever Eritrean first Patriarch, at that I was failed to recount this. I wrote it in my diary by aiming at having evidenced detail from the monastery abbot to know the source of this inscription. And fortunately, the aged but well muscled abbot attested that at Bizen Monastery the rule is taken to extraordinary lengths. Hence, not even female animals are allowed near, meaning only mules and male donkeys are used as pack animals.

Abune Phillipos, supposedly declared he would rather stare into the face of one of the lions—which at that time inhabited the wild mountain—than look into the eyes of a woman. When I arrived on the gate of Bizen Monastery, the scene remained incredible for moment as I perceived the existence of sporadically dispersed houses to stay there would be limited. Vice-versa to this however, the plateau of this Monastery is circumscribed with hundreds dwelling houses of the monks which are styled traditionally with one and/or two storey houses. The nooks of these houses have inescapable power to remind the narrow streets of Turkish era houses. Following to my request to trek the Monastery, the abbot was escorting me to find inestimable lessons about one touristy pivotal shrine which has located its position on acme Point of Bizen Mountain from where a visitor can fix his eyes across the crumpled folds of craggy mountains from the outskirts of Asmara to the remote mountain monastery.

The white beard abbot first channeled my adventure to look the exotic mountain cliff with gnarled tree that stands on the wind-blown rock which is known as ‘Kibetsini Adey’, a word that can be loosely translate as ‘lose your heart my mother’ . Even there were many youngsters who were sitting on this tree to show their maleness, eccentric to this however, I recalled the abbot for I suffered from nausea and vomit to see the seemingly endless cliff. Amid this, rings of the Church chimed. “It is time for prayer as we have seven times range for supplicating, reading psalms and Holy Scriptures,” clarified the abbot while we were directing our way onto the old Church which is named after the founder of the monastery- Abune Phillipos. Situated swollen with prides, this oldest Church which was built while Abune Phillipos was alive has a round engineering mode with corrugated iron roof which replaced that reeds or grass. On top of the roof of this aged Church there is evidence to claim that the existence of an intricate Orthodox Crucifi x and a circle of bells which jangle in the breeze.

The walls of the Church were painted yellow, with decorated wooden shutters and door. In the compound of this ancient Church, the monks were busy to accomplish their spiritual ministry sitting under the African species of olive which looks similar to the European and Eastern kind cultivated for oil, but is quite wild. Opposite to this old Church, there is one other Church of the Holy Trinity situated among the ancient vast loggia with a bell tower, a solid, square-looking mansion for the Patriarch, a pilgrims’ guesthouse with arched doors, monk’s cells, kitchen houses and a brewery. When I started yawning if I was remained sleepless for long nights, the slim bodied abbot canalized our way to the aged kitchen which attracted me for its blackened interior and other antique assets that counted hundreds years with their own respective legends and mysteries. Because that day was the yearly observance of the Monastery, in the three vast copper pots, a huge amount of cooking was reserved it’s inside place escorted by the gods of appealing aroma. “You know three cattle are slaughtered and have been serving to pilgrims,” thundered his mezzo-soprano sound the abbot.

Triumphantly, the vast copper pots were large enough to offer their endless food stocks to large number of pilgrims. During other usual life of the Monastery, there are daily men of duties who prepare the traditional Injera, dough soft pancake of Eritreans. Because the disciplinary spiritual codes of Bizen Monastery haven’t any cracks which allow separated and individual life, the monks live in egalitarian society; they wear the same clothes and eat same whatever sacerdotal ranks they have. It was midday. As I was on the tip of a mountain which seems to leap over the skies to capture belongings of the blue, similarly, the Sun was scorching highly as if it was mandatory to expose its admiration over this over 600 years counted eminent monastery. Amidst the silent atmosphere as many of the hermits were sheltered in their homes, I observed that day responsibly credited Reverend to partition the baked Injera in individual sacks with one allotment for every individual. When the Reverend intrigued me that one Injera serves for three days, I remained dump to perceive if all those who were counted over two-three decades survived in this manner. “Through prayers and ministry is living blessed here,” said to me as if he wanted to edify me for I asked him what are the inalienable measurements the monastery have been applying to crown one eremite with ranks of monkhood. I had my nostalgic night in the guesthouse that accorded me a soothing effect to my stay. However, because the monks were awaking up intermittently, they engulfed me by concern why they had a night like that? It was part of the seven prayers hour-horologium- time in which every monk has to pray and participate in the nightfall congregation. I entered into the Church in the dawn hours to unearth my observation to the colorful spiritual music they were confirming.

Headed my learnt monk of sacrosanct dances- Mihur Kine- the monks were accompanying the spiritual chorus by biting large drums which are completely different from the usual types I was looking in other parts of Eritrea. The tsenatsil or sistrum, a jingling musical instrument had a genuine role in the heart-taking composition. In the last day of my adorable stay from where I did a superb adventure, I had an opportune atmosphere to see the wonderful traditional library of this monastery which has preserved over 1,000 illuminated old, large and small manuscripts written in Ge’ez, a liturgical language with other hundred important relics of gold crowns and colorfully decorated clothes which as I believe would claim another intensive article in researched manner. Running as Gentle River, I left the monastery of undiscovered phantoms behind promising I will return one day.

Southern Region: In The Process of All Round Development