Southern Region: In The Process of All Round Development 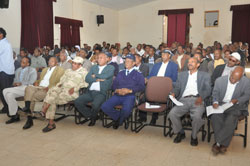 Last week, an assessment workshop on the accomplishment of various developmental activities that have been implemented for the last five years (2005-2009) in the Southern Region was held in the region’s capital-Mendefera.

The construction of schools was among the tasks to which top priority was given in the last five years; the program is directed to provide educational opportunities to students who previously used to attend classes in makeshift tents, geographically inconvenient areas and other remote areas in which there existed no access to educational services.

Drawing a comparison between the charted out developmental programs and their implementations on the ground, Mr. Kaled Saleh, Director of Engineering Services and Projects Management of the Southern Region, said that as there was high engagement of communities and administrative bodies, commendable tasks were accomplished in accordance to the set out plans.

Implementing projects by involving communities in the task has proven to be very encouraging; it enables the communities develop a sense of belongingness and raise their awareness of on how demanding and costly such projects are. Development programs carried out through popular campaign have particularly given respective communities the responsibility to look after and renovate social services.

Without taking the cost of the labor farce in to account, Mr. Kaled said that a total of 39 educational projects worth 92.5 million were completed.  As highlighted in the workshop, what particularly made impact in changing peoples living standards have been the implementation of around 140 projects for potable water supply. “Much of the budget earmarked in the last five years was for the implementation of successful projects in remote areas and to solve deficits of water supply in cities and semi urban areas. For instance the water projects of Dekemhare, Dubarwa, Segeneiti, and Adikeih was carried out at the expense of 2 million Nakfa,” Mr. Kaled said.

Around 26 road construction projects were also carried out. A bridge constructed in Mai-Tsebri at the cost of 10 million Nakfa enabled Maimne sub-zone to be connected with the rest of the region at ease and particularly solved the problems used to occur during the rainy seasons. Mr. Kaled also pointed out that prior to the construction of the bridge, farmers were not able to transport agricultural products to the market, and inhabitants in the localities used to encounter problems in getting social services as the roads were overwhelmed by runoffs during the rainy season. The Demhina- Karigosa line is another significant road that greatly impacted in changing people’s way of living becoming a crucial linkage with the Northern Red Sea Region.

Many general service projects were also put in place that include construction of and renovation of offices, fenced  sanitary areas, veterinary clinic, teachers’ residence houses and others.
Among the 13 projects of health services include, the replacement of hospital Senafe that was completely devastated by the TPLF aggression, a construction of new hospital that started in 2008 is now at stage of completion.  Recently completed communal hospitals in Fekyachekemte and Mai-Aini would be able to render services.  Including renovation activities, around 81 million Nakfa has been invested to enhance the region’s health service. Prior to the construction of Mendefera Referral Hospital, medical services were given in today’s School of Associate Nurse, which was earlier a hospital. This school is also upgraded with the construction of new hall as well as a dining room at the cost of 12 million Nakfa  to meet standards of viable learning environment

Finalizing a master plan of 31 projects for cities, semi urban, and rural areas was another area to which a considerable amount of focus was given. Over 12,000 hectares of land was surveyed for agricultural activities and construction of dams. In renovating residential houses destroyed by the TPLF’s aggression and constructing of some of the houses anew, a total of 97 million Nakfa was dispensed. Many families have been rehabilitated in over 4,900 newly built houses and financial support was also extended.

As Mr. Kaleab Tesfaslasie, head of Education Ministry’s branch office in the southern region, explained in the paper he presented that access to educational opportunities has been increasing in almost all sub-zones of the Southern Region in terms of the number of schools and geographical distribution.

According to Mr. Kaled Saheh the projects implemented in the last five years mainly focused on the construction of primary and middle schools. Where as projects that have been put in place in this year, besides the construction of additional classes to San-Giorgio secondary school, include the establishment of new secondary schools in Mendefera, Dekemhare, Segeneiti, and Senafe. Likewise, a primary school in Adikeih, and middle schools in Mezba and Embakokat are also under process.

The Administrator of the Southern Region, Mr. Mustofa Nerhusien, gave closing remarks highlighting that 67 health institutions have been making due contribution in providing healthcare services in the region. The availability of 493 K-12 schools and two colleges of higher education (College of Business and Economics at Halhale and College of Arts and Social Sciences at Adikeyih) have tremendously changed some aspects of the lives of the people of the Southern Region. The administrator added that the construction of 136 dams and 256 micro dams would enable farmers of the region cultivate from 2-3 times a year.

In the workshop, it was emphasized that concerted efforts being exerted in the agriculture sector have resulted to an increase of all agricultural products. Pointing out the introduction of advanced irrigation technologies would continue in an enhanced manner Mr. Mustofa said that additional farming areas would be cultivated.  Electricity supply activities would also continue to reach the areas that lag behind. Also according to Mr. Mustofa, there is good prospect of mining activities and that 12 mining sites have so far been identified.

All in all, 289 development projects were carried out in the last five years and about 977 Million Nakfa was invested towards their completion.