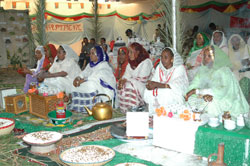 When dawn breaks, Hajah Fatimah begins preparing Eritrean coffee, the aroma of which fills her home, signaling her family and neighbors that it’s time to come into the dining room. For Eritreans, drinking coffee together is a social rite. All of those assembled exchange pleasantries, tell jokes, and discuss family matters and any other topics of interest. In fact, a unique feature of Eritrean coffee is that one is never able to drink it alone.

It’s strong aroma has an enchanting power that draws people together, especially when it’s cold. People usually drink four to five cups of coffee in one sitting. The more appropriate time to drink the beverage is during the morning; guests are usually served coffee at any time of the day. Eritrean coffee gets its exotic flavor mainly from olibanum also popularly known as frankincense. Served alongside coffee are pastries and popcorn. The coffee is also served in special serving cups. “Al-Harari” and “Al-Luqmati” are the best varieties of Eritrean coffee.

Eritreans have been drinking coffee for centuries, and say they were the first to identify the potentials of the coffee plant and the first to grind coffee beans to enhance the taste. Their method of brewing coffee has also existed for centuries. The brew is prepared in a special stove, known as a “Kanun” or “Farnello.” Before grinding, the beans are roasted in a coal stove and then poured into a special pot made of clay called a “Jabanah,” which is so indispensable to Eritrean coffee that people call them Siamese twins.

Eritreans believe that it is the “Jabanah” that makes the Eritrean coffee different from Arabian and Turkish coffee. A pan called “Qallayah” is also a must in making Eritrean coffee. The pan is used for roasting the beans before grinding. A wooden pot is also used in preparing the beans. The kettle that boils the coffee is called “Al-Sharqarq.” All of the utensils are made of special clay mined from the Waqar region in the east of the Sudan.

The beans are,  however, pounded in an anvil called “Fandak” and a pestle, which are made of iron. Feeling nostalgic and reminiscing their home country, Eritreans who live abroad often hold coffee drinking sessions, which serve to strengthen their cultural and national bonds. Old people use the coffee sipping sessions to refresh memories of yesteryear. It is not an exaggeration to say that the coffee culture keeps Eritreans united despite their communal and cultural diversities.