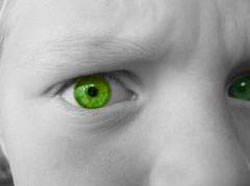 In Shakespeare’s Othello, the protagonist elopes with Desdemona, and is accused of stealing her. Blinded by prejudice, Desdemona’s father cannot believe his daughter could love the Moor, a man of a different race. However, Othello movingly defends his love and demonstrates the nobility of his character. Iago was a treacherous comrade. Angered that Cassio was  appointed as Othello’s lieutenant, a post he wanted, Iago plots his revenge. He warns Othello that Cassio is having an affair with Desdemona. Brilliantly manipulating Othello’s jealousy and rising anger. Iago has his wife Emilia, who is Desdemona’s serving maid , steal a handkerchief that Othello gave his bride at their wedding. Iago plants the handkerchief on Cassio. Convinced of Desdemona’s infidelity, Othello strangles his beloved wife in their marriage bed. Emilia then proves Iago’s guilt and Desdemona’s innocence to Othello. Othello stabs Iago, who is under arrest, but fails to kill him and commits suicide.

Othello was not the only one who commits murder in a fit of jealous rage. Jealousy has ruined many relationships and broken countless friendships. Every one of us envies our friends, spouses or siblings, compelling us to do things that we could not explain later.  Harboring suspicions and doubts about our beloved ones make us do things that we regret very much later on.

Not only among friends but also take the example of spouses that have been together for three years. The moment that he sees her laughing and talking with another man or him with another woman,  then the trust and faith that have kept them going for the last three years will blow away like a house built on a sand. These kinds of petty jealousies and fights only prevent us from looking beyond the surface and construct a meaningful and lasting bond with our friends or spouses.

Let us see another incident that I encountered some months ago: there is a guy that checks his girlfriend call history and contact list on her mobile phone every day to see whether she calls anther person, to be specific any man beside him, or adds a new contact to her list.  He did this every time they met, even if it means twice a day: not only that, but when it comes to him, he would not even let her touch his cell phone. And God forbid if she has to use his cell phone, first he would dial the number himself and she has to have the conversation in front of him and once it is over, he will snatch the phone out of her hand before she has the chance to push the end call button.
He is indeed a jealous boyfriend but why would he act like this when he has the love of his life in his hands?

According to experts, jealousy is the expression of two emotions fear and anger. One becomes jealous of another one due to the fear that the person is going to abandon them and they will be alone. The second emotion that causes jealousy is anger; people who cannot have what they want or a person angry with a certain individual for taking what belong to them and moves on, the anger lead to jealousy. Those two emotions are the core causes of jealousy.

And if those the two feelings are the emotions that drive people to the green-eyed monster, then my friend’s claim is not related to jealousy where as the guy’s issue is  pure jealousy because he is afraid that his girl-friend may leave him .

Professionals also suggest some tips for avoiding jealousy once the issue is identified as a jealousy –
1. Acknowledge the emotions you are experiencing – is your jealousy more of fear or anger once you identify those emotions it will be easy to deal with it.
2. Communicate with your emotions and while you are trying to express your feelings, emphasize more on I than You.
3. Identify your jealousy, why are you jealous? What is making you jealous? And once those questions are answered, you can move towards positive thinking.
4. Change false beliefs that may cause jealousy.
5. Compare yourself with yourself not with others.