A National Conference on Science Laboratories 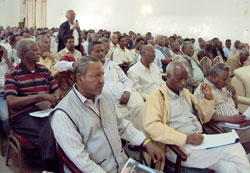 Mr. Semere Russom welcomed all the participants and thanked the Organization Committee for making this conference successful. He further pointed out that the fact the dissemination of technological knowledge to the youth is one of the basic objectives that our national curriculum focuses on. However, this can’t be achieved by academic theories alone. The integration of theoretical and practical education is imperative. The Minister empathically noted that education is a key player in all aspects of development and he confirmed that those who are better developed are those who are educationally well-off. He further stated that thanks to education, we are living in an epoch of high-tech, which has brought our world into smaller “globalize” village.

Eritrea, as a new comer to the international community, said Mr. Semere, had a legacy of an irrelevant education system, which exclusively served the previous colonial regimes for their political machination. Consequently, the bequeathed colonial system had to be uprooted and replaced by the more relevant and responsive education policy in the wake of independence. He further explained that thanks to the accumulated experience and vision of the EPLF, the current education policy had its genesis in the struggle for independence. As a result, the country has come up with a well-defined education policy. The policy, which evolves from the grassroots level, has made remarkable strides in the accessibility and equitability of education in the country.  Quality, as part of the policy, said the Minister, is another focal element that calls for vigorous efforts.  But quality among many other things requires a number of things to launch a full-fledged laboratories. To this effect, the types of laboratories required at secondary school level should be well equipped. Nevertheless, care needs to be taken that laboratories alone are not and can’t be the panacea to all the missing portions in a science laboratories. Management, effective administration, devotion of teachers, role of the director and the partnership of the PTA and other inclusive elements should be seriously taken into consideration. The Minister said that all education practitioners and participants should note that academic theory unless supported by practical demonstration can’t produce fruitful outcome. Therefore, the role and function of science laboratories needs to be resuscitated in order to expedite the dissemination of scientific knowledge in the minds of our promising youths. He also added that, though all our schools may not be well-equipped with up-to-date laboratories, studies have shown that there are some schools with good laboratories. Available chemicals and other elements need to be properly stored and utilized lest they should be denatured or turn disadvantageous. All local administrations, communities, people and professionals should join hands to invigorate the utilization of science laboratories. Having given all the above illuminating guidance, the Minister declared the conference officially open.

Also speaking on the occasion, Mr. Musa Naib, the Director of the Department of General Education at the Ministry of Education, stated that the conference is expected to come up with important and practical proposals by reporting and reflecting the situational analysis of science laboratories in contributing to the development of science education; and by defining the role that partners could play in the aspect.

Mr. Musa continued to say that five research papers focusing on the general picture of what science laboratories should look like would be presented to enable the participants to generate ideas about what can be done to bring the laboratories into a better situation. He further pointed out that at the moment, science laboratories were not being fully implemented due to diverse reasons, some of which can be cited as non-fulfillment of chemicals; absence of manuals or directives; dearth of trained human resource; lack of having hands-on experience by subject teachers or demonstrators; lack of managerial skills on the part of directors and other problems.  The Director General called upon the participants to raise and discuss every facet of the problem and thereby dig for a workable proposal.

According to Mr. Teclehaimanot Debesay, Co-coordinator of the Secondary Curriculum, the conference was attended by about 360 participants including higher officials in different capacities. Heads of regional education branch offices, supervisors, laboratory technicians, science teachers, Heads of regional education sectors, stakeholders, representatives of private schools, experts from the Central Office of the Ministry; and other invited guests. This conference was first of its kind to be held at such level.

As per the regional papers presented at the conference, it was indicated that there are about 90 secondary schools across the country.

According to the individual reports, almost all secondary schools except those in the Central region are not in good standing in matters of prevalence and performance of laboratories. They don’t either have a full-fledged laboratory or have no technicians or laboratory buildings or chemicals or even none of those mentioned above.

Upon the presentation of the five research papers, questions and comments were forwarded  from the participants for possible and plausible explanations and observations. Comments and further illuminations on certain points of discussion were also more than welcome. For practical and manageable exploitation of the participants’ input, 11 groups were formed each with specific points of discussion. At the plenary session, many ideas sprang up from the different groups and were well recorded for further use and jumping-off points.

The Conference was held in a cordial atmosphere characterized by transparency whose valuable contributions were well taken. The catch-phrases of the Conference read off:

Finally, the conferees came up with detailed and useful recommendations, which were well recorded for further use and harmonization. The conference was finally concluded by Mr. Musa Naib, who thanked all participants for the useful and creditable job they did during the two-day conference.

The 1967 Attack By Ethiopia And Consequences