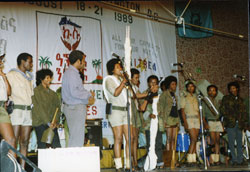 Features of the Eritrean Festival

Festival Eritra is a yearly folk-fair whose season opens up around the first two weeks of August of every year, in the capital Asmara. It first started in 1984, during the years of the struggle for liberation, has had enormous impact on Eritrean heritage of conserving national identity. The history of the founding of festival Eritra is a cultural political counterpart of the “unity in diversity” policy of the Eritrean People Liberation Front, and its strategy of political and cultural representation. During the period of the liberation struggle, especially after the 1970s, there was no public space that could be used for festival purposes, although many Eritreans came together from near and far places in order to attend musical and dance shows in liberated areas.  As a result, the Eritrean Peoples Liberation Front introduced the idea of ” cultural troupe” in the mid 1970s as a form of entertainment for fighters and combatants and, more importantly, as a way of energizing nationalist feelings and thereby adding vigor to the struggle for independence. Musical and dance shows with all the costume wearing and hair-dressing that goes with them, theatrical scenes, camel races, and soccer games became part of the tasks of the cultural troupe.

The portrayal of cultural traditions of the various ethnic groups and the presentation of local cultural material in a larger, national festival long before and after independence promoted the political praxis of homogenization the different Eritrean societies and created a frame of reference that de-emphasized local differences. In this culture, new types of music and dance developed, and cultural traditions were re-evaluated in order to attach then to the form of national representation associated with the “unity in diversity” policy of the struggle for liberation and strong belief in an indivisible nation later depicted as “one people, one heart”. Since 1984, Eritreans in the diasporas in Europe gathered annually in Bologna, Italy, in order to take part in a “national” festival consisting principally of live musical and dance shows, drama presentations, cash contributions, and sale of native cooking and cuisines, and to listen to the latest liberation struggle developments.

Eritreans who were unable to join the liberation struggle for all kinds of reasons and who then were residing abroad contributed to the struggle for independence: by lobbying foreign governments, collecting and donating funds by mobilizing meetings, rallies and campaigns in support of the nationalist struggle and by sending remittance to kin and friends in enemy occupied lands through festivals. Festival Eritrea in Bologna was but an annual folk-fair where all these social, economic, and political resources were mobilized and negotiated and put together mainly in the form of live stage shows in the presences of Diaspora Eritrean people.

Though Festival Eritrea did give a twist or new dimension to Tigrinya dance that is even common today outside festival circles, in weddings and other cultural ceremonies and identified as the unmistakable genre of Tigrinya dance. Tigrinya dance is danced throughout the country not only by adults but also by growing up children who increased its popularity enormously by dancing it on every possible occasion. After independence the Bureau of Cultural Affairs within the Ministry of Education and now the National Holidays Coordinating Committee, have striven to promote national unity and cultural diversity by encouraging points of contact and exchange between the different cultural traditions in the country.  Thus, Festival Eritrea in Asmara is an annual event recreated in 1993 out of which evolved region based folk fairs involving all the different ethnic groups, thereby contributing to the formations of a national culture from the multi-cultural make-up of Eritrea.

At the present, there are two types of festivals in which cultural traditions are presented:

a. The annual folk-fair of the local regions
b. The annual national festival held in the capital, Asmara, known popularly as Festival Eritrea.  The Festival is a platform that brings musicians and dancers with their costumes and ornaments representing the diverse Eritrean ethnic groups in order to create a sense of national consciousness and togetherness and as a forum for explaining the policies of government and presenting issues of national development.

Festival Eritrea is a traditional cultural event. From the early years of its inception, it involved the presentation of traditional songs and dances of all the people of Eritrea and acted as a platform for ethno cultural affirmation. The only change now is that these traditional representations are interspersed with modern songs of professional artists accompanied by modern musical instruments. There is thus now commercial competition and concern for audience consumption satisfaction through the sale of market produced goods and services within the Expo grounds than there was ever before when Eritreans from within and outside Asmara celebrated the festival by taking part in only the public presentation of traditional music and dances.

In recent years, the festival ground has also featured regional cuisines and privately operated business booths such as local restaurants, bars and cafes who rented mini spots on the festival grounds, advertised their consumable products in order to attract customers, and offered foods and beverages as well as some industrial products. During festival days, some stalls or booths in the festival grounds are thus devoted to the demonstration of various crafts. This gives visitors a sense of economic functioning involving bazaar settings through the haggling or bargaining, selling and buying of merchandise, leads to a better appreciation of the overall event, and adds color to the incident rather than causing a detraction of spectators’ attention from the festival operations.

The 1967 Attack By Ethiopia And Consequences