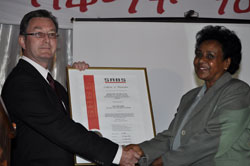 Numerous accomplishments in various domains have enabled Eritrea to achieve international acclaim. Of the many tasks carried out to provide equal access to essential social services, quality health service stands out in particular. Eritrea has thus far been certified by accreditation bodies for its accomplishments, especially in the health sector, where remarkable reductions in malaria, polio as well as communicable disease   transmissions are case in point. In keeping with this pace, Eritrea has now become the third African country to win the international certificate for quality blood transfusion management.

Set up in 1999 as a center, the NBTS has not only been a blood supply center to many hospitals through out the country, but has also been working to meet international standards of blood transfusion management system through the implementation of ISO 9001:2008.

Working in accordance with the internationally accepted management systems enables the NBTS run its activities effectively to the level of utmost excellence.

To reach this level of achievement the NBTS has been employing the best practices of blood banking management system. It has been also visiting many institutions and organizations to reach as many people, conduct awareness rising campaigns and encourage them become regular blood donors.

In the official ceremony of the certification for quality blood management system held last Saturday at the West End in Expo, songs, poems and dramas onstage conveyed messages that blood donation is humane gesture and one’s engagement in such benevolent actions is saving lives. The performances invoke empathy that helping patients in need of blood donation is a priceless and conscience satisfying act.

In the event of certification in which high-ranking government officials, ministers, representatives of Swiss Red Cross (SRC), representatives of blood donors, and invited guests took part, Mr. Neil Rosin from the SRC handed over the Certificate to the Minister of Health Ms. Amna Nurhussien.

Owing to the benevolent initiatives of nationals, the minister said that there have been no recorded fatalities due to lack of blood donation. She emphasized that 80% of the blood transfusion services that have been carried out in the country have been supplied from the center whose excellence has just been recognized. The minister went on to say that as all donated blood should pass through screening for positive tests, besides taking concerted efforts to increase current status of blood supply, the ministry has made necessary preparations to open new branches of blood bank centers throughout the country, which would start with the opening of such a center in the Gash Barka region.

Eritrea’s commitment to the memorandum of understanding between Eritrea and the SRC, Mrs. Gabriele from the SRC international cooperation said that the access to safe blood and blood products can not be taken for granted in African countries. “Having a functional Quality Management System in place means to provide high standard transfusion of medicine to your country.” She added.

The Director of NBTS, Dr. Yifdeamlak Tesfamariam, on his part stated: “As a young blood bank institution and knowing the unique challenges that we have had to face in pursuit of reform and modernization, this achievement is truly a milestone.”

A National Conference on Science Laboratories