Running Eritrea: The Emergence Of A New Running Nation 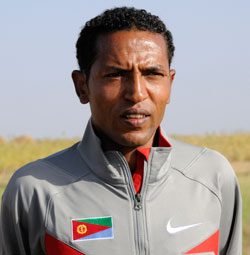 When most people think of long distance running and Africa, the nations that come to mind quick are Kenya & Ethiopia. These two nations have dominated the long distance sport for many decades and continue these days to be top long distance running nations in the world just like they were more than 50 years ago. In the early 2000’s however a nation less than 15 years independent and known more for soccer & cycling was starting to get some attention internationally and in North America. It was in the mid 1990s when a young Eritrean-American who migrated here at a young age and picked up the sport of running in the American inter scholastic system took the college running scene by storm. Meb Kifl ezghi broke all kinds of records at UCLA (University of California Los Angeles) and became one of the best runners in the history of the sport. Another Eritrean who also pioneered the growth of the sport Bolota Asmerom run for University of California at Berkley and represented Eritrea in international competition. Other runners also qualifi ed and represented Eritrea from the U.S. A. Meanwhile in Eritrea the sport of running started to get some attention. The organization known as Eritrean American Athletics Association lead by Yohanness Debesai and other Eritreans who had different roles was offi cially established in the city of Atlanta during the Eritrean Sports Festival annual event that took place in the year 2001. The likes of Zeresenay Tadesse, Yared Asmerom, Samuel Tsegai, Ali Abdella Afringi, Yonas kifl e, Kidane Tadesse and more runners including female runners like Simret Sultan, Nebiat Habtemariam, and Furtuna Zegergish started to make headlines. As most of us know since then with the collaboration of EAAA and the Eritrean National Sports Federation, the country continues to produce more top notch long distance runners that are bringing amazing results. It is also to be known that many other runners of Eritrean heritage have excelled in different parts of the world including Canada’s top runner imon Bairu who was an NCAA champion at the University of Wisconsin in Madison. Many more youngsters male and female have attended college through scholarship as a result of the growth of the sport. Most Athletics competitions particularly the sport of running is very interactive. People learn from observing and following them sometimes unconsciously. The running euphoria that has taken Eritreans by surprise in the past decade is not any different. Eritreans and the international community have started to witness, to watch, to understand and experience the logic behind the very quick success of Eritrean runners who have been registering amazing results in many competitions throughout the world. Like everything else in Eritrea the development of running is starting to be witnessed everywhere. Though it garners less attention than cycling and soccer, thousands of Eritreans throughout the world are already passionate about, and conversant in the sport of running. In fact, it may well be the most closely followed sport at the moment as a result of the success stories of the greatest runner to come out of Eritrea Zeresenay Tadesse. In the high school and college scene Shewit Weldensea has been showing some great success in the Raleigh North Carolina, winning several competitions while Meron Fessehaye also in the North Carolina (Charlotte) doing very well. We will try to feature more high school runners as we gather more information. The unique part about Shewit is she has been very successful fi nishing in the top 10 in the 1500-meter, which is considered more of a middle distance running. Petros Welday from Maryland is also showing a lot of potential fi nishing in top spot at a recently held national footlocker running event. It is also to be remembered that this past September Eritrea stood fi rst in the 26th World Mountain Running Championship that was held in Slovenia in which over 120 athletes from 40 countries took part. In the men’s race covering 12 kilometers, Eritrean athletes fi nished 1st, 2nd, 4th, 6th, 9th and 12th respectively. Eritrea stood fi rst followed by USA and Italy. Similarly, Eritrean athlete Yosef Andemichael won gold medal in the 8.5 Km-long similar junior men’s race. Meanwhile in Singapore at the 2010 Youth Olympics, Eritrea’s Abrar Osman crossed the fi nish line to win gold medal in the men’s 3000m fi nal Singapore 2010 Youth Olympic Game. Abrar Ousman took most Eritreans by storm when his name was all over newspapers and websites.The testimony for the success and visible rising of the Eritrean athletes in the world arena is the recent status of Zeresenay Taddese as the World Male Athlete of 2010. Zersenay stood fi rst with 52.56% leading David Rudish of Kenya by 17.86%. The selection of Zeresenay Taddese as the World Male Athlete of 2010 is a good opportunity for Eritrean young athletes for they will be inspired by his success and develop their determination to continue his legacy. Every Eritrean is also very proud of the announcement that an Eritrean is a world class athlete of this young country and it is every ones hope that our fl ag will fl y high in every athletics event world wide.