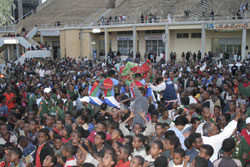 The country rose on its feet to hear that Eritrean cyclists have grabbed eight gold medals, one silver and one bronze in the three-day African Intercontinental Cycling Championship held in Kigali (Rwanda) from 10-14 November 2010. It is a bright new dawn. Eritrea, aiming high, stood top of the continent beating countries with huge cycling talents like that of South Africa and Morocco for the first time in its cycling competition history.

Notably, Eritrean cyclist Daniel Teklehaimanot made history by winning five of those eight gold medals in the competition to front-page headlines through out the continent. The five gold winner Eritrean cyclist’s success resembles that of Michael Philips, the Beijing Olympics2008 record holder swimmer, who to everyone’s surprise, earned five gold medals in the competition.

cond, awfully 2 minutes and 19 seconds behind. As you go down the result, the gap between Eritrea and the other following teams soars higher and higher making Eritrea the strongest team of the competition. Eritrea kicked off the competition
earning gold medal award in TTT. Favorites South Africa (56:31:00) and Ethiopia (57:20:00) finished second and third while Team Rwanda had a rough outing as they struggled to eventually finish 9th.

After the race, to the surprise of the participants, Frekalsi Debesay was heard saying it was a very demanding race. “It was very hot out there. We are not used to such high
humidity but we are glad we pulled through.”

On Friday 12th November 2010, an individual time trial competition took place where every country had to be represented by only two riders. Accordingly, coach Samson Solomon selected our elite cyclist on the international level Daniel Teklehaimanot and Algiers All Africa Games silver medalist Frekalsi Debesay to represent Eritrea in the field.
Daniel, who is honing his cycling talent in Switzerland at the UCI training center and Cervelo
Cycling Team made no mistake in riding the fastest time of the race.
He covered the 33 km long racing field in 44:37:83. Frekalsi followed him 3’14’’ behind, ranking 7th.Daniel added another 2 gold medals in this particular ITT race both in the elite and U23 category. The last time Daniel took gold in an individual time trial race was about four years ago in an ANOCA competition held in Kenya.

Daniel Teklehaimanot ,the evident and dominant figure of the African Intercontinental Championship competition also won elite title in this particular competition followed by local hero Meron Russom and Dan Craven from Namibia on the podium. Dawit Haile stood 5th as Natnael Berhane’s fresh out of the kitchen talent made him stand 9th.Teklit Tesfay stood 11th as the accident victim Frekalsi Debesay fell to 19th, eight minutes behind the winner Daniel Teklehaimanot.This is the best African championship result so far for Eritrea which is adorned with lofty gold, silver and bronze medals.

Daniel and Meron for London Olympics 2012

he astonishing victory of all Eritrean riders in general; the gold and silver road race medalist in particular has lifted and jetted Eritrea from African Championship to London Olympics 2012. As

was announced before the competition, the first two road race winners Daniel Teklehaimanot and Meron Russom won the two London Olympics2012 tickets that were on stake for Africa as a whole. Thus, in the most enviable Olympic competition, the two Eritreans will represent Africa. And Africa has to be represented well. This means it leaves them with a lot of work to be done in the coming two years so that our riders could be fit enough for the Olympic pro-race. You can’t rely on raw talents to succeed any more. Thus Meron Russom, in particular, needs further individual trainings and opportunities like Daniel in tough competitions along side professional riders in Europe. It is crystal clear as to the fast progress Daniel has achieved since he’s based in Switzerland under UCI. So should Meron Russom if he is to accomplish his London2012 homework neatly. Of course they have proved their mettle in defying African best riders. The local federation has to knock on the UCI doors for the trainings and opportunities to come up for Meron Russom and other young talents alike. Africa should be represented well by Eritrea in London Olympics! Participation isn’t enough at all.

The story of Daniel Teklehaimanotis more like the story ofNwankwo Kanu. Both are black and tall African sportsmen. Their success in sport flourished despite their life and career getting threatened by their critical heart conditions. They were once forbidden from doing any kind of sports activities because of their heart condition. Daniel had serious level of tachycardia that cast his career in doubt. So did Kanu. After successful heart operation, they both were able to continue their love for sport professionally to the highest level. The fact that Nwankwo Kanu is a Nigerian footballer whose sun is nowadays setting off; where as Daniel Teklehaimanot is an Eritrean cyclist whose sun is shinning brightly is one of the main differences they bear between them. For Daniel, ‘cycling is both sport and salvation’ as is football for Kanu.

Cycling Culture
“Make no mistake,” said Gudo Kramer, manager of the global Marco Polo cycling team, during an interview sometime back, “Eritrea is the only country in the world where cycling is its largest national sport. If you venture outside the Capital Asmara in the morning, all you see is road full of cyclists on their morning exercise routine; including young kids riding their mountain bikes, all sponsored by the state. “Indeed! Even Eritrea’s greatest sports man Zersenay Tadese who is the current world half Marathon record holder and one of the last five nominees for the 2010 Athlete of the year (to be announced on 21November) brew his love for sport through cycling before shifting to running. Cycling is culture for Eritrea.