Asmara Among 10 Tourist-Attraction Cities In The World: Lonely Planet Website 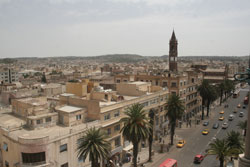 Lonely Planet website placed Asmara city which is rich in classic Art deco among the 10 cities in the world are attracts-attractions.

Asmara, 19 November 2010 – Lonely Planet website placed Asmara city which is rich in classic Art deco among the 10 cities in the world are attracts-attractions.

In the list, the German city of Berlin built in the Stalin architectural style ranked first, followed by Ayacucho in Peru, Beirut in Lebanon, Asmara, Eritrea, the Scottish city of Glasgow, the Nicaraguan city of Leon, the Dutch city of Rotterdam, the Russian city of Volgograd, the Canadian city of Yellowknife and the Serbian city of Belgrade.

Lonely Planet website said that Asmara is the most charming city in the African continent as attested by the fact that it has been categorized as the 4th tourist-attraction city in the world.

It further pointed out that Asmara was built in Italian style by Benito Mussolini during his failed campaign to establish the 2nd  major Roman Empire in Africa. All buildings in Asmara are breathtaking with spectacular varying beauty from one another.

Lonely Planet website referred cited some of Asmara’s spectacular buildings, namely Fiat Tagliero portraying an image of a plane ready for takeoff, the Education Ministry building which used to be the headquarters of the Italian Fascist Party and still more.

The website further explained that Asmara city used to be one of those which were ignored by tourists under the excuse of being in “war zone” due to the 30-year long armed struggle for independence against Ethiopian colonial rule. At present, however, Asmara has become one of the tourist-attraction charming cities with the prevailing peace and stability.

It is to be noted that the building of the former headquarters of the Italian Fascist Party bears a structure sign of the alphabet “F” representing the designation of the party.