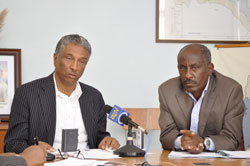 The Ministry of Health is striving to provide quality health service wherever and whenever a citizen may be in need. At this important stage of national development in which huge investment is being made to further expand and deliver standardized services, it is imperative to review the efficiency of health institutions operating in various parts of the country. In this regard, the Ministry of Health has introduced a new working mechanism for private clinics to render quality services in view of the fact that some of such clinics require restructuring and reorganization. All the privately owned health sectors have been found to be providing inadequate services without any remarkable enhancement and as such, the Ministry was compelled to take remedial measures so as to rectify existing problems. Shabait conducted a brief interview with Dr. Tesfai Solomon, head of regulation services, and Mr. Berhane Gebretinsae, Director General of health services at the Ministry of Health. Excerpts follow:

Let’s start with the present condition of private clinics in the country?

Dr. Tesfai: Any professional who meets the criteria stated in the Health Ministry’s proclamation 74/95 regarding private clinics was legally permitted to open a private clinic. Accordingly, 53 private health centers are operating in the whole country, 70% of which are located within the capital city, Asmara. Save for five polyclinics, all of these private clinics have only one doctor.

Mr. Berhane: The purpose of opening of private clinics was to supplement the services provided by Government health institutions. Some of the criteria in the aforementioned proclamation stated that any health professional was allowed to open and work in  private sectors in his/her free time and  a physician is only permitted to work in one private clinic. These stipulations are included so that physicians work in private sectors only in their spare time.  Nevertheless, these rules were gradually all violated. To make matters worse, the quality of services rendered by these clinics continued to decline. As consequence, the beneficiaries became victims of such a scenario. Thus, the Ministry of Health was compelled to take remedial measures so as to better coordinate and reorganize private clinics in the country.

Explain to us the general capacity of these private clinics?

Dr. Tesfai: From the beginning, the standard required to open a private clinic was minimal with the idea that they would eventually progress in due time. Today however, the reality on the ground is contrary to the initial belief. The clinics lack enough wards, basic laboratory and other equipments and patients were compelled to go to government hospitals for simple tests. Moreover, though visitation fees are officially regulated, patients were charged extra fee for medical examinations and drug prescriptions. Gradually, such clinics became more money-oriented instead of serving the public as their mission required. Hence, the negative consequences of such haphazard services on the public health as well as the general health sector in the country grew too pronounced to be ignored and thus had to be dealt with.

So what measures have been taken by the Ministry of Health?

Dr. Tesfay: Realizing the need for restructuring the work mechanism of these clinics, the Ministry stopped issuing new licenses five years ago. Then, all private clinics were informed to make the necessary preparations since a new restructuring would be carried out in August 2010.

Mr. Berhane: The fundamental healthcare services are provided by Government health institutions. Even in countries cited as exemplary for their efficiency of health services, the basic care is provided by state owned institutions. There are distinct differences in the responsibilities and obligations of government-owned and private health institutions. Therefore, it is time to introduce a better work procedure for the advancement of the healthcare system considering the experience gained over the past years.

How would be these privately owed health centers reorganized?

Mr. Berhane: Private services would be opened within the government health institutions from 5pm onwards. The plan is to implement government investment in comprehensive way where physicians could use the modern equipments available there and patients can obtain efficient service. This would create conducive grounds for the utilization of Government’s investments for the benefit of the public.  In addition, the Ministry can easily regulate the services delivered by these private health sectors. All the necessary preparations have been finalized to this end and some of them have already commenced.

What work opportunities would there be for employees previously working in private clinics?

Mr. Berhane: Most of them as I have mentioned earlier are government workers and have made investments in their own ventures. Committees were formed to study how to use the equipments there and to address complaints. Vacancy announcement was published in newspapers to provide work opportunities for those qualified and interested to work in such institutions. There is no doubt that the remedial measures undertaken would bring about tangible changes in the quality of services.

Tell us how the issue of fees would be handled in such a new work mechanism?

Dr. Tesfai: The undertaken research was instrumental in identifying the problems and ways of resolving it. It shed light on the fact that medical examinations were carried out far beyond necessary and lab examinations as well as x-rays were charged extra money. Prices would be reviewed and fixed in a way that motivates skilled professionals and is at the same time fair to customers.