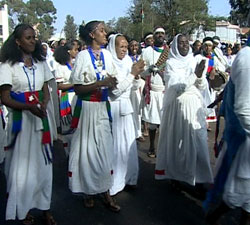 The consumer component of the presentational foci of the festival has thus evolved to include material and cultural demonstration and the preparations and consumption of ethnic foods in various restaurant stations. Apart from the music and dance presentations, and display of national costumes and bodily adornments, the culinary sections of the festival include the regional foods and coffee brewing.  The competition to serve the best dish in the festival ground is high which will determine not just the best recipe, but also, the best place where it is made and who makes it. Bazaars are part of a festival where the ethnography of commerce and entrepreneurial exchange is embedded in the sociology of a folk-fair event. Festival Eritrea is therefore a composite folk-fair presentation of music, dances, foods, crafts and rituals and other ceremonial traditions from variety of Eritrean regions, and, is an occasion that enhances national sentiments and cohesion.

Over the years, Festival Eritrea has been successful in terms of attraction and participation of artists and spectators. On the average no less than 500,000 guests per year visit the event. The high rate of spectators’ attendance is also a commentary on not only local perceptions of the importance of national cultural shows but also on the relevance of the historic, symbolic and tourist content of the event.

The members of the cultural troupes that are scheduled to perform at Festival Eritrea are carefully selected at the regional level by the office of regional administration based on their exemplary expertise in a particular cultural tradition presentation genre and recognition by community elders. In addition to the basis of a balance in geographic, ethnic, and linguistic representation of the Eritrean peoples, the regional festival organizers tour their region in order to deepen their knowledge concerning local traditions, and ensure that the root forms of cultural traditions. In addition to make, appeal to the local people to have a high regard for their own culture, it includes the commitment to the use of traditional musical instruments and to show cultural troupes how to perform on stages of city surroundings.

The arrival of artists in Asmara is carefully planned in terms of lodging and habits of cooking and cuisine. Buses carrying festival participants come to the capital some three days ahead of the opening day. The marching into the Expo Festival grounds displays a mix of traditional libations and modern accouterments. The regional cultural troupe representatives and their members then paraded past government officials, diplomats, religious leaders, and the public and stopped for a moment at the performers’ platform in a gesture of greeting to the spectators on the day of the festival opening.

Festival Eritra is a subtle but powerful event, also dramatizes the relationship between festivals organizers and the local cultural troupe representatives. The representatives are placed upfront with the music and dancers in the background. The spectators’ conclusion about what they are doing and what they are supposed to be doing in this novel situation, and the resulting stage performances emerge out of the spectators’ own expectation, and past festivals experiences, are influenced by  input from festival organizers and by the upholding of the festival itself at the Expo grounds.

All aspects of Festival Eritra, ranging from the opening ceremonies and display of costumes to music and dance shows different ethnic groups are subject to various interpretations and numerous innuendos. Festival organizers, artists and spectators, businessman, government officials, diplomats and tourists all comment extensively during the days of the festival event and for weeks afterwards and make comparisons with Festival Eritra in other years.

One of the primary reasons for going to the festival village is to see the various indigenous cultural shows of the different Eritrean ethnic groups and to engage in the lively conversation about them. Artists, spectators, and other people in the festival come from inside and outside Asmara or Eritra in anticipation of meeting family, friends and strangers and speaking to them in different languages. In a way, the festival village is the logistic, linguistic, tourist, acoustic, kinesthetic, dietetic, and symbolic center.

The specific programs vary from year to year, but typically consist of the live musical and dance presentations accompanied by portrayal of traditions costumes and bodily adornments of the various Eritrean cultural groups. The ethno-musical presentations and dance performances are the most eagerly anticipated events of Festival Eritra. Apart from the selected song and dance performances, oral poetry readings and theatrical presentations, Festival Eritra, as noted earlier, is also articulated and complemented through the traditional costumes and bodily adornments of artists and spectator participants. Theses consist of the woven cotton clothes of the Tigrinyia, the cotton cloth shorts and shelled anklets of the Kunama, the long robes and colorful waistcoats of the Saho, Tigre, Rashiyda, Hidareb and the Nara, the brightly colored wraparound skirts of the Afar, and the richly decorated and embroidered head dresses, and nose and earrings of the Bilen. Within the general public, men come around in European style casuals while women’s clothing varies from cotton loincloth to wraparounds. Although festival artists and participants can wear things of their liking, ethnic group and religious affiliations or loyalties are sometimes expressed through cultural clothing.

Presentations plans of the festival called for participation and collaboration of both performers and organizers and both developed an appreciation of each other’s artistic contributions and perspectives on their own crafts. During rest periods, festival artists took snack breaks, moved around and did errands, changed clothing for different presentations and left for and came back from lavatories while spectators wandered and drifted in and around live stage performance places. The public milled about everywhere in the festival grounds and many times encroached the circles occupied by traditional artists. Musicians and dancers from diverse Eritrean ethnic groups offered their various talents to bring to life not only the festival but also their status as an ethnic and linguistic community within a national Eritrean society. These traditional artists unusually give three to four formal presentations per day during the festival weeks. While most main-stage musical presentations are highly amplified and can often be heard all over and beyond the festival fences at the Expo grounds, they all articulated the national sentiments of Eritreans and their catchy chorus sometimes tempted audience members to sing and dance along. Eritreans thus signaled their sense of national affiliation by taking part in Festival Eritra presentations of regional cultural songs and dances.

In general, the festival village is a live microcosm presentations and a cross-current glimpse on the cultural traditions of all Eritrean ethnic groups. In such a festival environment, Hidareb singers for example, sang bout heroic hunts, Bilen and Tigrinyia couples depicted courtship dances, Saho women gathered in preparation for martial relations, Rashaayda men displayed competitive lance dances, Tigre musicians sang birth rite songs welcoming newborns while Kunama and Nara dancers demonstrated the importance of the harvest season. In a way, then this annual festival provides the people of Asmara and other Eritreans and the foreign tourists a chance to know and learn about the larger social and cultural foundations of the various Eritrean ethnic groups, educates the culture, and calls upon the concepts of cultural diversity and national unity across regions and continents. The live performances present a comparative perspective by bringing together Eritreans from different cultural groups who wear different costumes, display varied bodily decorations, speak different languages, profess different religions, and play similar or different string, wind and percussion musical instruments. This reveals that Festival Eritra is significant because it is an event deployed in cultural, economic, religious and political negotiations pertaining to regional resource allocation, cultural conservation, and national identity.

Workshop On Ways Of Ensuring Health Of Students Conducted