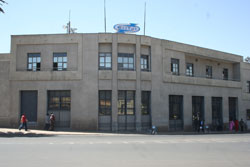 One of the crowning developments of the information era is without a doubt the Internet. It has been effectively connecting the entire world despite geographical gaps.  Latest technologies have evermore impacted its influences on diverse disciplines. This being the general fact about the significance of the internet service, ten years of its introduction in Eritrea has enabled nationals connect with the rest of the globe. As Eritrea has been creating viable atmosphere for the nation-building process, enhancing and upgrading such services would in fact tremendously impact its all round progress.

Eritrea’s internet services provision which started in late 2000 has gone through different phases of developments. Notwithstanding its developments since its early introduction, the provision of internet service has not reached the desired level of expansion to benefit the entire population of the country. It is to keep up with the global pace and to meet the increasing demand of   the general population that concerted actions have been taken to steadily advance the internet services.

In its early days of operation the internet service that was provided in Eritrea started with a very limited bandwidth of ½ megabyte downlink and ¼ megabyte of uplink capacities. To better facilitate communication, the internet provider severer needed to offer greater rate of data transfer. The Eri-Tel, therefore, had to extend the bandwidth through satellite-based 2G (second generation) internet service technology, which is very expensive.

Through unremitting efforts of the Eri-Tel, internet service bandwidth has been increased to 30 megabyte of downlink and nine megabytes of uplink capacity.  Taking into account the ever growing demand of the people of Eritrea, however, there is still a need for improved communication. Huge costs of satellite-based internet service have been the cause to hinder the increase of bandwidth and the number of internet service providers.

So far internet services are available in Asmara, Keren, Mendefera, Dekemhare and Massawa. According to Engineer Mihreteab Tesfagergish, head of mobile telephone and internet services in Eritel, coverage of such services would be increased with the introduction and expansion of electricity services in different parts of the country. Tessenei and Barentu are among the cities that would get better internet services in accordance to the over all expansion plan. However, if the local internet service is to advance, joining the 3G technology remains a necessity requisite.

The commendable achievements Eritrea has been registering in various domains would sharply rise with the implementation of the 3G fiber-optic line which is a high-speed internet access. As it has many features the 2G cannot provide, the implementation of the 3G would solve earlier costly air-based connections.   Such advancements of high connectivity that embrace real-time digital multimedia performance would enhance the health, tourism, e-commerce, education and other sectors as well.In keeping with the MDG, for a country that has been striving to meet the international standard of a doctor per population ratio, the introduction of 3G bandwidth would enable the population take advantage of telemedicine services.

“We have been putting the necessary infrastructure for the 3G mobile internet service which would begin as soon as submarine fiber-optic services become operational,” Eng. Mihreteab said.Such a service would further allow the inter-school integration via the intranet service, as well as pave a way to bolster the transfer of knowledge and skills on a global scale.Tourism, e-commerce, and free trade zone that make up a considerable part of Eritrea’s national development program could definitely benefit from good use of broadband technological advances.

National Documents: The Back Bone Of The People’s Identity