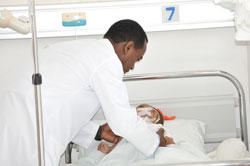 They stated that they pursued a 3-year course on general surgery with special emphasis on kidney surgery that would play vital role in promoting the development of the health sector. They went on to say that they have been working in various hospitals in different tasks and expressed satisfaction with the opportunity provided to them on the part of the people and the Government. The doctors further asserted that they are equipped with enough theoretical and practical skills and are hence fit to undertake speedy and efficient operation.

Meanwhile, another 4 Eritrean doctors who have been specializing in Pediatrics following a 2-year course would graduate shortly. The medical doctors commended the Eritrean people and Government for providing such opportunity, and voiced determination to live up to expectations.

It is to be recalled that a total of 31 medical doctors and 8 specialists graduated on 5 December 2009 for the first time on the basis of the nation’s internal resource.