Incredible Site Atop A Mountain 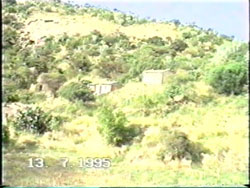 The landscape of the region is a combination of vast meadows and steep mountains with different vegetations and shrubs scattered all over the region. Though majority of the land type falls in the category of either meadows or the high mountains, there are few exceptional areas where one can find a mountain in a middle of a meadow or mountains with steep slopes in both sides.

It is here in this hilly highland terrain of the Anseba region that one of the country’s oldest monasteries, the Monastery of Tsaeda Emba Selassie is located.

The monastery sits wedged atop one of the region’s highest mountains, mount Tsaeda Emba. Climbing this mountain is not only hard but also dangerous and anyone who is interested in visiting this monastery would have to climb this steep mountain and crawl through the edge at the entrance. This edge is where the two sides of the mountain meet forming sharply steep slope, making it impossible for a person to stand on it. Despite this fact, the monks in the monastery are used to the edge and can walk over it without much difficulty, but to anyone visiting walking with two legs on this edge is impossible.

ry unique besides its landscape is that no female beings are allowed to enter whatever the reason. There is also a spring in the middle of the monastery whose waters are believed to have healing powers. The monastery also possesses various religious books aging some 600 years.

During the Italian colonial period, the Italians asked the monks to build a road as an entrance to the monastery, but the monks refused and stuck to walking over an edge of a mountain. Despite the steepness of the area, no life has been lost in climbing the mountain so far.

An incident that happened in the 1970s also marks the monastery as an exceptional one.  In the summer of 1970 the area around the monastery received a heavy rainy season and during this season lightening struck the mountain on one side and left its mark there. The mark left by the lightning resembles the map of the country. During that period of time the monastery was used as a hiding place for the fighters of the Eritrean People’s Liberation Movement.

Since the monastery is located in an isolated area, it gets almost no social services. As a result, the monks take care of all the services and goods that they need in their life.

The Emba Selassie monastery is the only monastery established by an Eritrean monk in the country.  The monastery celebrates its annual festival on July 7 every year.

Initiatives Taken To Correct The Liberation Movement And The Outcomes