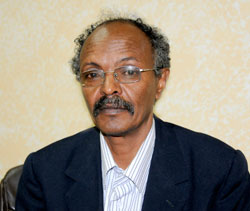 ERI-TV audience have called for paying close attention to programs not presented on schedule and the content of alien movies and songs.

Asmara, 2 December 2010 – ERI-TV audience have called for paying close attention to programs not presented on schedule and the content of alien movies and songs.

They stressed the need for demonstration alertness during broadcasting as many programs and songs are interrupted before conclusion, besides the repetition of programs. Moreover, ERI-TV programs should be presented in accordance with the time and date announced in the newspaper.

Noting that ERI-TV programs are making noticeable progress, Mr. Mohammed Abdalla and Mr. Adem Idris, both of them followers of national television programs, emphasized the need to supervise alien movies taking into consideration the negative influence they  have on the young generation. The viewers also reminded the need for broadcasting more educational entertainment programs, film series, and locally produced movies as well as for news readers to apologize whenever technical problem occur.

Responding to the issue of repetition of programs, the director general of Television Department, Mr. Asmelash Abraha, said that repeating programs are common in the world, and the reason for that is the need to pay due attention to the task of creating the opportunity for broad section of the population to follow programs.

Stating that it is unfair to broadcast movie series neglecting the daily aired programs in the language of the nation’s different ethnic groups, Mr. Asmelash also explained that the necessary steps would be taken in line with the scheduled programs announced in the newspaper.

As regards foreign movies aired via ERI-TV, he indicated that control methods are applied on the part of the Department, and that ERI-TV is not in a position to broadcast locally produced films due to copy right.

Mr. Asmelash went on to say that the Television Department is making relentless efforts to improve programs in general and entertainment ones in particular in the coming months.

ERI-TV which broadcasts 85% of its programs that are locally produced with wide distribution around the globe is one of the few TV stations in which citizens eagerly follow up the programs presented.