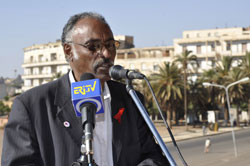 Since its first appearance in 1980s, HIV/AIDS is claiming many lives regardless of age, race, religion or gender. It has left thousands of children as orphans and inflicted immeasurable socio-economic loss. According to studies, 1.8 million people living with HIV/AIDS have died in 2009 alone globally and people are still infected with the preventable virus with each passing day. Beginning from 1988, 1st December is observed as World AIDS Day so as to enhance awareness, fight prejudice and raise money to combat it. Eritrea being part of the global undertaking marked the World AIDS Day for its 17th time this year under the theme ‘Universal Access and Human Rights’ to end HIV/AIDS infection. Dr. Andeberhan Tesfatsion, Director of National HIV/AIDS and Tuberculosis Control Department in the Ministry of Health conducted interview with Shabait in connection with the day. Excerpts follow:

Let’s begin with the general status of HIV/AIDS prevalence?

HIV/AIDS swiftly spread in the world since it first appeared and the infection rate had increased by 10 fold during the 1990s. The number of HIV/AIDS patients reached up to 33.4 million in the late 2008, 24% of which were found in developing counties particularly in Sub-Sahara African countries. Moreover, 2.7 million were newly infected with the virus in this year alone, most of them again living in developing counties. At present, however, hope is unfolding as the number of newly infected people is declining in many countries. Developed counties have been able to put under control the spread of the disease, while more efforts are needed in developing countries.

In Eritrea, the number of patients was 2.8 % based on the research conducted in 2001, while now the spread of the disease has dropped to 1%. Thanks to the government’s genuine efforts to control the spread of HIV infection and public awareness the number of infection is declining from year to year.

What about the ongoing endeavors to control HIV/AIDS ?

Our department outlined a five-year strategic work program. The plan is implemented in collaboration with all private and government institutions. Concerted efforts are exerted to help patients organize within the Bidho HIV/AIDS association, where they could get assistance both morally and materially. The Government is disbursing 8 million to 10 million Nakfa annually for providing medical care to nationals living with HIV/AIDS so as to enable them become productive. About 6,680 are taking the antiretroviral drugs.

Tell us more about the Bidho HIV/AIDS Association and its role?

It was established in 2002 and various ministries have made due contribution for the association to carryout its activities effectively. It has about 15,000 members including patients living with HIV/AIDS and families of the victims. The mission of the association is to give moral support to people living with the virus to change their behavior and take better care of themselves. Indeed, it has provided much needed hope to many of them and helped them believe that they can lead their live normally by following up proper treatments and medications. Rehabilitation programs and anti-discrimination campaigns are also part of the association’s objectives.

What are some of your department’s efforts in this case?

The strategic plan for 2008-2012 includes prevention of new infection, better treatment for patients, and provide assistance and promote awareness campaigns. The public has great responsibility to play crucial role in mitigating the spread of the disease. Various activities are carried out such as training to bring about behavioral change, voluntarily HIV examination, counseling, preventing the transfer of HIV from mother to child, transfusion of safe blood and utilizing safe medical treatment. Moreover, further assistances are provided by the Ministry of Labor and Human Welfare to orphans and patients to become self-supporting.

HIV/AIDS is one of the most deadly and at the same time easily preventable diseases the world has ever seen. If prevention methods are cautiously followed by everyone we could easily put it under control. Society should treat victims without discrimination and the victims on their part need to exert utmost efforts to halt the spread of the disease.