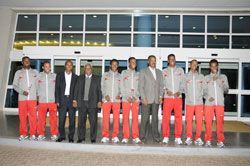 In a dinner reception hosted at Hotel Asmara Palace in honor of the cyclists, the President lauded the competence and spirit of competitiveness they demonstrated in the race. He further pointed out that the Government’s investment in sports would continue with added vigor.

President Isaias further called on the cyclists not to relax with  such victory but instead redouble efforts to register still more gratifying success in other big international competitions in the future.

The President also extended financial incentives amounting to 100,000 Nakfa to each cyclist and the coach, in addition to 50,000 Nakfa each to the team leader and the mechanic.

The deputy president of the Eritrean National Cycling Federation, Mr. Tesfai Berhe, who traveled to Rwanda leading the team, and Mr. Samsom Solomon, coach of the team, gave briefings on the competitions conducted and the awards won. They also expressed appreciation to President Isaias for his continued support and encouragement to sportsmen and sportswomen.

Also on the occasion, cyclist Daniel Teklehaimanot who stood first in the African Continental Championship and ensured his participation at the London Olympics 2012 presented the honor of jersey which the team won to President Isaias.