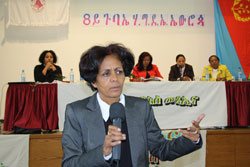 The NUEW branch in Europe conducted its 8th regular congress in Frankfurt, Germany, from December 4 to 5.

Asmara, 8 December 2010 – The NUEW branch in Europe conducted its 8th regular congress in Frankfurt, Germany, from December 4 to 5.

In the congress in which women from 8 European countries took part, a report on work accomplishments of the branch office over the past 3 years was presented on which extensive discussion was conducted.

The report disclosed that major accomplishment has been registered in organizing women, and that the branch office has constructed women training centers in Gash-Barka region and Adi-Keih. Encouraging task was also carried out in organizing youths.

Lauding the development programs being implemented by the people, Government and members of the Defense Force, the participants of the congress reiterated determination to enhance contribution to the national development drive. They also elected an Executive Committee that would provide leadership to the branch for the next 4 years.

Parents Called Upon To Properly Follow Up Student Academic Performance

Lecture Given In Barentu On Ways Of Minimizing Accidents