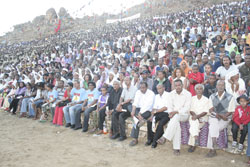 “If I were asked what the best investment was,” said a certain proponent of education at one occasion “I would make no bones about saying ‘education’”. His down-to-earth statement is crystal clear; for someone who favours an immediate return it may be a bitter pill to swallow though. The big question at hand is ‘how to make this golden point well taken by some individuals who prize fi nancial and material possessions more than the potential education offers?’As stated above, it is palatable to say that educational investment is the most profi table one even though it doesn’t have an immediate return. As a necessary condition, it can easily be equated to any development with which it plays a symbiotic role in interplay. Without education, one can hardly think of any fruitful move; for any activity without it becomes a walk in the dark.

Education is not an intrinsic quality that humans are born into. It has to be sweated out, for it cannot rain from the skies like ‘Manna’! As a social process, it calls for concerted action. In other words, The Ministry of Education and all the concerned stakeholders, have to make strenuous efforts by pooling their resources together for the realization of the intended purpose of education. Like other developmental investments, education calls not only for careful planning, fi nancing, deploying of trained and experienced personnel and mobilization of material resources but also for a clearly delineated objectives, policy and strategies as well as relentless monitoring and evaluation, not to mention the degree of commitment which is a concomitant step in the process.

Formulation and dissemination of policy is not and cannot be enough evaluation is of necessity in the process of implementation. In light of this, the Ministry of Education, which has the prerogative to oversee the overall educational development across the country, is doing its utmost efforts by creating conducive literary environment, as much as time and resources permit. To ensure proper and timely implementation, the need for continuous monitoring, evaluation and consultation in collaboration with the concerned educational institutions comes to the minds and hearts of the Ministry.Having this at the back of his mind, Minister Semere Russom, the Minister of Education of the State of Eritrea, paid a two-day visit to Warsay Yikealo Secondary School (WYSS)- Sawa to see the educational activities are being conducted as to the set plan. Upon his arrival Minister Semere made a beeline for the Warsay Yikealo Secondary School (WYSS) Administration Offi ce to take stock of the learning-teaching situation in general. During the transparent discussion and consultation, it was clearly stated that things are going smooth on the academic ground as planned and desired with some minor exceptions that prove the rule. Such close relations and discussions are instrumental to further propel the full realization of the lofty objective of the project. According to the furnished offi ce report, things proved that what has been entrusted and projected is on the move and on the right track.

The deliberate and major focus of Minister Semere’s tour was to come closer to the students and measure their situation to be followed by an update on certain educational domains through face-to-face conversation or a common forum. He addressed the two sessions, (late afternoon and early morning), by greeting them in the name of their parents, relatives and counterparts. His congratulatory words on their good semestrial exam results were highly listened-to and well accorded with big hands. Reciprocally, the Minister wished them that their next results and especially the results of the ESECE would be as good as their wishes and efforts. In his speech, the Minister made it clear that more supportive programmes like the ICT and other projects are around the corner to make the teaching-learning process more meaningful and appreciative. The Minister further urged the students to work hard and attain their goals for education is a great investment in Eritrea, a country that focuses on the importance of trained and experienced human resource as the biggest asset of all things around development. His account on the importance of education was linked to the awareness that the EPLF had during the war for liberation. He further stated that the current education policy had sent its roots to those days. As a continuation of the past, he went on to say, the people and the Government of Eritrea are doing their best to promote education at all levels and corners. There are also international pledges and commitments like Education for All (EFA) and Millennium Development Goals (MDGs) that we have to realize, as part of the international commitment. As per these, every illiterate citizen is expected to be able to read and write by the Year 2015. In other words, he said, we have been entrusted with lofty responsibility which every Eritrean, including you, has to shoulder as well.

There is no denying that alternating colonial powers bled the country white and deprived the citizens of access to education for quite a long period of time. As a result of this, deep seated illiteracy, which is cancerous to national development, was observable prior to independence. However, strenuous efforts have been made and the strides made since post- independence are praise worthy. All the same, there is still high expectation to move further more. The Minister went further to state that our effort is not limited with academic education only; the offer for technical and vocational education is also progressing in line with the policy. It is understandable, he remarked, that the more educated people a country has the more it is capacitated to shape its destiny and make progress. It is here where the sharp difference between the economically advanced and those which lagged behind exists. Education sharpens the struggle between survival and death. The educated ones can survive not only politically but also economically, culturally and socially as well. On the contrary, those underprivileged are always under the shadow of dependency and illiteracy and live under aid instead of trade and other viable national activities.Taking this into account, said Minister Semere Russom, the Macro Policy of the 1993/1994 clearly stated that education is free and obligatory to every citizen. Accordingly, the number of schools ranging from pre-primary to secondary has now reached about 1567. Correspondingly, the number of teachers has grown to about 17,000 to 18,000 including the non-teaching staff; and the number of students has increased from less than 200 thousand before independence to about 800 thousand, of which the 17,500 students of the Warsay Yikealo are part. Reports indicate, the Minister said, that at this moment any Eritrean child can go to school on the average at a distance of every three kilometers. This is really a big success thanks to the substantial investment that Eritrea has been making in this sector.

Turning to the tertiary education, the Minister said that what used to be only one University located at Asmara now has gone up to eight colleges. The diversifi cation of fi elds to different areas might have been construed by some elements as deliberate neglect of the University. Equally important is also the gossip that some elements have about the quality of education offered at this historical epoch. The government is working hard to safeguard the quality and standard of national education as much as possible. We fi rmly believe that our education is sound and growing more competitive. Products of the current education system have performed with fl ying colours overseas like in China and India. We don’t worry much for this for we are in the safe process. We are trying to stand on our feet; as an expression of which 32 medical graduates have completed their professional requirements last year. Besides, said the Minister, efforts are being made to abolish illiteracy at country level. Preliminary preparations are going on to start the fi ght against illiteracy. The opportunity for open distance education is also on the ground. To date, about 2000 teachers are following up their continuous education. The focus on Technical, Vocational Education and Training is also being streamlined with academic education. There are about 8 technical institutions on this fi eld of attraction. About 132 graduates of the TVET and teachers are being enrolled at Mai Nefhi, Eritrean Institute of Technology. In concluding, Minister Semere Russom, the Minister of Education, said that it is imperative that our young and budding youth, as core pillars of tomorrow, have a clear picture of what is going on. He exhorted to them to work hard and that their convictions and saleable ideas must be directed to the benefi t of the nation; for the country expects much from the 24th round as other rounds are also expected in the same way.

At the end of each session, important questions were thrown to the fl oor for which the Minister illuminated without reservation.Apart from this, the Minister also had a brief discussion with the representatives of the teaching staff of the School. The meeting focused on the different issues that can invigorate the teaching learning process of the School. As part of the discussion, questions were raised and discussed. Such forum was seen as an opportunity to both the students and teachers on one hand and the Ministry of Education on the other. It is a sort of stock taking, to know where all stands!