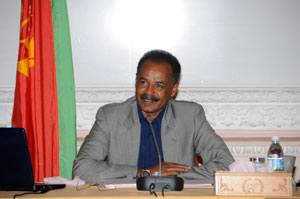 A meeting of the Eritrean Cabinet of Ministers got underway today at the Denden Hall here in the capital. In its first agenda, the meeting heard extensive briefings by President Isaias Afwerki assessing political, economic, social and diplomatic activities this year, as well as the envisaged national development programs for 2011 and beyond.

Asmara, 14 December 2010 – A meeting of the Eritrean Cabinet of Ministers got underway today at the Denden Hall here in the capital.

In its first agenda, the meeting heard extensive briefings by President Isaias Afwerki assessing political, economic, social and diplomatic activities this year, as well as the envisaged national development programs for 2011 and beyond.

In his briefings, the President pointed out that the biggest budget would still be allocated for the task of achieving food security on priority basis in the envisaged national development programs for 2011 and beyond. Noting that crop harvest in 2010 was satisfactory, he underlined that the strategy of enhancing national food reserve would be reinforced in the coming year. To this end, expanding and strengthening rain-fed agricultural activities, irrigation farming and leveling land plots, in addition to promoting  forestation, soil and water conservation, reserve land and animal husbandry and wildlife would be among programs to be given due attention, President Isaias elaborated. He went on to stress that developing domestic capacity in harnessing marine resources is of vital significance. In this respect, the President noted that parallel with the task of upgrading domestic fishing and processing capacity, extensive programs are being launched towards boosting export through working in partnership with foreign companies.

As regards the trade and

industry sector, President Isaias said that plans have been charted to reinforce trade and industrial ventures in 2011 through providing budgetary support and loan opportunities. Agro-industrial establishments and building materials producing plants would be given priority attention in this regard, he underscored. Moreover, the President pointed out that there are plans to develop port and bay facilities in 2011 and beyond, in addition to the construction of airports in Dahlak Island and the western lowlands, coupled with the expansion, renovation, and asphalting of strategic roads. Likewise, study and drafting activities would be undertaken to develop old and new railway

system on the basis of internal resource and foreign companies. He further outlined programs in the construction of water diversion schemes and agricultural infrastructure in both the eastern and western lowlands, as well as the central and southern highlands, the implementation of residential housing projects in various towns and semi-urban centers, in addition to the putting in place of  health and educational institutions, storage devices and sports facilities, among others. In this connection, President Isaias explained that boosting the production of building materials, cement, iron and steel materials is imperative. He noted that the Cement Factor expected to go operational next year and the establishment of iron and steel plant in the same year would provide major impetus to construction works.

Concerning the energy and mines sector, the President highlighted the envisaged programs focusing on raising fuel and gas supply, expanding electricity service in different parts of the country, as well as exploration and mining activities in the year 2011 and beyond. Parallel with the activities being carried out in partnership with foreign companies, endeavors would be stepped up to develop internal capacity and enhancing funding potentials, he underlined.

Furthermore, President Isaias noted the tasks that need to undertaken as regards upgrading public transport service and expanding communications facilities. On harnessing tourism potentials, he stressed the paramount importance of developing domestic tourism and said that loan support would be extended with a view to strengthening the capacity of service-rendering institutions. Also in his briefings regarding land, water and environment, the President indicated that efforts would continue to streamline land utilization programs and that special attention would be given to the formulation of the necessary rules and regulations pertaining to the promotion of sound ecology.

In the domain of social services, he outlined the plans drawn up to further upgrade the provision of reliable health service, besides raising the production of medicaments. Similarly, concerted action would be taken to strengthen the competence of teachers, develop laboratories, workshops and information technology facilities at all levels of educational institutions, in addition to making available sufficient textbooks, President Isaias explained.

The President also elaborated on the role of the Ministry of National Development in the streamlining of development programs, as well as future work programs of the financial sector, administration of justice, labor and social security, reinforcing defense capability, police and security institutions, coupled with strengthening media and diplomatic activities, as well as the restructuring of the Ministry of Local Government. He further gave in-depth analysis as regards the prevailing political and security developments at the regional and international level and their impact, as well as future trends.

Following the President’s extensive briefings, the Ministerial Cabinet meeting conducted in-depth deliberations sector by sector regarding the development programs for 2011.

The meeting continued in the evening hours.

Inhabitants of Beilul get access to wind-energy generated electricity service