Debarwa: The City of Ancient ‘Sea Lords’ Part I 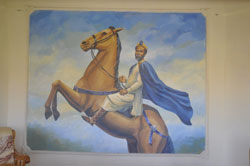 Across the Mereb valley just 28 kms to the south of Asmara, Toyota Hilux suddenly came to a stop. It was a photographer’s command.  “Please wait, wait! Please stop here a minute,” yelled our photographer. The driver took a quick look in the left mirror, slowed down the car, looked for a position, and just across an eye-catching bridge he brought it to a stop.  The photographer hastily dropped of the car, went down the stream and quickly snapped half a dozen of shots of a bridge from down the stream. Again he took another couple of shots from sideways “Can you see how lovely the bridge is?” asked the photographer. “Yes, it is really a moving art,” replied another friend. “But it is not a surprise; we will have a lot of them all along our way.”
Again, just after a 100 meters drive we would enjoy another small but interesting bridge. That again is as majestic as the first one; they are of the same style and fashion.”   From atop they appear ordinary bridges. If one happens to take a closer look from down the stream, however, the bridges appear as magnificent as an art of work in a distinguished gallery. No wonder, those stylish bridges are the gatekeepers of an undiscovered city museum. Just past the bridges on a hill we would discover another mystery; the home city of the ancient ‘Sea Lords’, Debarwa.

The legend of the old town begins in a newly constructed charismatic structure set up at the center of the town, known as the Bahre Negestat Public Hall, literally interpreting, “the Hall of the Sea Lords”. The hall, stationed in a large lovely garden, may look like an ordinary city park aimed at entertaining people. Its striking setting attracts people from variety walks of life. Especially in the shining Sunday mornings, sitting inside the refreshing heavenly garden of the city hall, some busy businessmen discuss about the market. Somewhere under the shades and behind the dancing flowers, a striking couple kicks their Coca Cola bottles while they are intimately talk to each other.

Taking the advantage of weekend’s break, under the cool shades vibrating garden umbrellas, a group of young Halhale Business College students joyously discuss on the supply and demand of goods and services. Different from this situation, but in the same place and time, the mode of a lonely old gentleman sitting far inside the garden with a cup of cappuccino on his table, signals in a poles apart manner. The man, at times, aimlessly combs his long grey beard with his fingers and at other times concentrates at a picture up through the transparent door of the first floor of the hall. Looking responsively at the picture, the man speaks to himself loudly. “Hero,” he howls.  To him he was not alone talking with himself. He had gone far to memory. In fact he was talking with his forefathers. He was revising the story of warriors of the early centuries of the country who defended their homeland from barbarous invaders.

Understanding the mode of the gentleman, one may be tempted to know more about the picture he was talking with. The picture depicts a story of a strong man in a crown riding a vigorous horse. According to traditiona

l accounts it is the picture of the ancient king of the land of the sea, King Yishak. For this reason, it is worth discovering more about the town, which is a source of pride to the people of Eritrea. That picture is a password to access a bulk of undiscovered story about Debarwa. For this reason, we had to contact the city museum; the old monastery up on the mountain to the southwestern tip of the town.

In a ten minutes cruise along a zigzag way, we managed to reach at the monastery. Fortunately, we were met by the Bishop of the town, Abba Mathiwos, who is believed to have rich accounts on the town. According to him, Debarwa was an established city with a strong and centralized kingdom, and an army of 17, 000 horsemen ever since 1800 B.C. The town was also home to around 80 lines of kings. What is more? The first Christian Church in the region was established in this town. According to traditional accounts,  King Ezana of the well-known ancient Aksumite kingdom,1st century B.C. until the early 7th century, adopted Christianity, here in the town of Debarwa,  from Abba Selama Kesete Berhan, the first Christian Missionary  who crossed the Red Sea to Eritrea to preach and expand Christianity  in 328 G. C .

Then after, it is believed that two Christian Syrian boys, Aedisius and Frumentius, expanded Christianity to the region in the same period.  Prior to the conversion of King Ezana to Christianity in Debarwa, little is known about the religions that existed in the region, and the kingdom as a whole. It is said that some of the names of the gods who worshipped are still surviving. Astar, believed to have more connection with Greek god Zues was the chief god, and Mahrem was a war god which is similar to the Greek god Ares. To these end, remains of a number of religious buildings still exist. In connection with this, a variety of inscriptions are contained in a number of important old towns in Eritrea. The Red Sea port of Adulis was one of the largest. It contained stone churches and houses. The language of the kings of the ancient city of Debarwa was Ge’ez, for which its characters, scholars believe, is derived from alphabets in use in southern Arabia for related languages. Besides, Geez was a language commonly used in the ancient city of lords for trade as well as for official purposes.

Yet, according to the Church accounts, there is another memory in the town that is associated with the kings of the region during the ancient times. At the southern tip of the town, on the way to Halhale College, stands an average mountain known as Gobo Mslam. It is said that King Ezana received his throne here on this mountain because Debarwa was responsible for the blessing of newly adopted officials and kings. There is no official account to why that specific mountain was chosen for that purpose; but its proximity to the first Christian Church could be one of the reasons. Strolling up the street of the cute and fast growing town, one enjoys another different historical memory.

Just some 200meters, on the north western tip of Debarwa, up on a hill, stands a majestic hotel named in memory of Abraham Hanibbal, the great grand father of the Russian famous poet and author in the 18th century.  It is believed that Abraham was abducted by the Turks when his father was killed in a war between the then king of the city of Debarwa and the Ottomans, who attempted to invade the Eritrean highlands at one time. Thus, at this time, a beautiful hotel, “Hanibbal Hotel”, has been established and stands high in the town in memory of Alexander Pushkin’s ancestors. With all of the above stories in its heart, Debarwa, currently, looks like an ordinary fast growing town with a population of 19,000. It is unique for its serenity, moderate climate, clean and refreshing environment. Extending on the bank of the tail of Mereb valley, some 2000 meters above sea level, the town enjoys an annual rainfall that varies from 350 – 660 mm.  Tigrinya is the most widely spoken, and the most commonly used language in the market.

A Church and a Mosque are, side by side, standing tall in the center of the town, entertaining the Christian and Islam followers, which is a strong signal of the people’s unity and mutual respect. The name “Debarwa” is probably derived from the so called Mereb River that passes along the eastern tip of the town. Its meaning, perhaps, is “a town whose border is a river”. Debarwa, at the moment, is a bustling market town. It is the business and administration center to about 82 villages and a population of 85,000.  The old city’s infrastructures of the communications network are rapidly improving. Cell phone and fixed telecommunication services have been set up and are widely used by the citizens of the town. It has an access to a 24-hours electric power supply, and smooth roads that connect the town to almost all the villages of the sub zone, other regions, and the capital of the country, Asmara.  It also possesses a cinema, beautiful modern hotels like Hanibal hotel and Wehabit Hotel. This is an indication that the government of Eritrea has paid much attention to improve the urban center of the ancient city of ‘Lords of the Sea.’  Hence, the government has once again established an industrial zone which is open and attractive to foreign and local investors all alike. A large area of land has been reserved private houses, another large is under construction. So far around 253 private investors are at work in the town. Many more are rushing, applying to install a variety of businesses and factories including mining projects. The future of the town, therefore, seems lively.