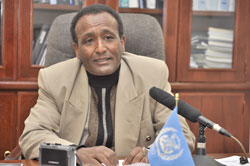 Modernizing a war-ravaged marine transport for a young nation such as Eritrea was not an easy task to begin with. Though the nation is blessed with abundant marine resources, they were completely left unexploited until independence. Following independence, the Government began building up standard marine transport from scratch. Enormous tasks have so far been accomplished particularly in renovating and putting in place of basic infrastructure facilities on the basis of internal capacity. Endeavors towards internationalizing marine transport are continuing at great pace so as to boost its contribution in economic progress. The Director General of Marine Transport Department, Mr. Gebremedhin Habte, briefed Shabait concerning its activities. Excerpts follow:


Let’s start with the overall activities of the Eritrean marine transport?

The department is endeavoring to provide reliable, regular, efficient and pollution-free services. Over the past eight months, we have been engaged in providing scholarships to upgrade the capacity of our human resources in collaboration with regional and international institutions. The Government has adopted a proclamation regarding equipping manpower to meet the international standard. We have also drafted proposals and introduced new work procedures in ports and maritime corporations.

Can you mention some of the activities accomplished in the past years?

Radical changes have been made through substantial investment in the first phase of reconstruction process including expanding of the Massawa port dock areas, construction of containers, renovation of the port of Assab, purchase of three ships and introduction of modern equipments.  Recently, the Government has also purchased two ships, namely the Aizola-Dahlak and Aluli, which have capacity of accommodating 800 passengers and 250 vehicles each. These ships are expect to make due contribution in the investments being made in Dahlak.

Explain to us some of the future work programs?

A plan has been outlined to renovate 14 lighthouses, which are significant in guiding sailors. We are also planning to install modern radio communication system along the 1,200 Km.-long coastline. The putting in place of these facilities is decisive for safety and reliability of navigation. Moreover, the construction of Hirgigo oil jetty has commenced at a coast of 450 million Nakfa. Additional ports around Zula and Ti’o would be set up to accommodate export ventures.

What would be the input of marine transport in the economic growth of the country?

Marine transport could induce dynamic change in the development of a country, and our aim is to make optimal use of the resources we have. Eritrean coastline is strategic and safe for transshipment of cargo, which plays significant role in raising GDP of many countries. It would also have great contribution in achieving food security, in addition to promoting import and export activities that would have great impact in improving the living standard of the people.

Is there any message you would like to add?

Every citizen is duty-bound to protect the coastline from any kind of pollution along modernizing to utilize it properly. The society, especially those in the highlands should be aware that developing marine transport is vital in providing job opportunities and should activity engage in bunkering and other business ventures.

Debarwa: The City of Ancient ‘Sea Lords’ Part I

Streets in Barentu town under renovation