Role Of Service-Rendering Institutions In Directing Youths Need To Be Enhanced: Report 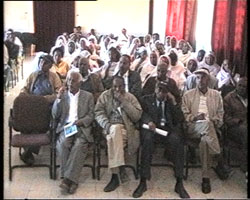 A panel discussion conducted in Mendefera town highlighted the need for the general public and especially service-rendering institutions to enhance contribution in directing youths.

Mendefera, 18 December 2010 – A panel discussion conducted in Mendefera town highlighted the need for the general public and especially service-rendering institutions to enhance contribution in directing youths.

The Minister of Tourism, Ms. Askalu Menkerios, commended the role played by such service-rendering institutions in the town and noted the paramount importance of nurturing educated, skilled and disciplined youths in the nation-building process.

The Administrator of the Southern region, Mr. Mustafa Nurhusein, said on his part that increased contribution of the instiutions, coupled with parents and teachers have vital significance to play to this end. The initiatives due to be launched in Mendefera town in 2011 would be expanded to the remaining parts of the region.

Also speaking at the panel discussion, the Chairman of NUEYS, Mr. Sultan Seid, pointed out that parallel with the substantial investment being made in education and vocational training, due attention needs to be given to the construction of youth recreation centers.

The panel discussion focused on avoiding selling of alcohol to underage children by service-rendering institutions, placing posters that reflect the society’s values and identity, as well as seeking ways and means of enabling youths make good  use of internet service, among others.