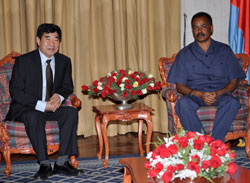 In the meeting at the Denden Hall here in the capital, the President briefed the  head of the Chinese construction companies on the development of Eritrean-Chinese relations and the significance of working in partnership as regards development programs, as well as the role that Chinese companies could play in enhancing relations of partnership between the two countries.

The Chinese companies that engage in construction works include China Road & Bridge, China Harbour, Sichuan Road & Bridge and China Tianjin Corporation. Discussion was also conducted during the meeting on ways of working jointly with Eritrean national construction companies in diverse infrastructure development domains in the year 2011.

It is also known that continued contacts would be made with pertinent bodies as regards details about the activities of the Chinese companies.

Sireru: Female participation in education on the rise