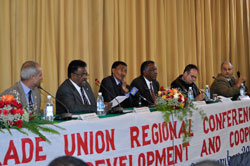 A High-level Trade Unions Regional Conference on Development and Co-operation opened today at the NCEW Hall here in the capital.

Asmara, 20 December 2010 – A High-level Trade Unions Regional Conference on Development and Co-operation opened today at the NCEW Hall here in the capital.

Speaking at the conference, the Head of Political Affairs at the PFDJ, Mr. Yemane Gebreab, pointed out that the unjust and illegal US sanctions resolution against Eritrea adopted in the name of the Security Council has been foiled thanks to the firm unity of the Eritrean people. In this connection, he explained that sanction is being employed by major powers as the main tool of exercising domination and intimidation, and thereby implement their policies.

The Secretary General of the National Confederation of Eritrean Workers (NCEW), Mr. Tekeste Baire, said on his part that the Confederation, as member of the ILO and other regional trade unions, is striving to develop relations and share experience.

He further indicated that a number of trade unions have strongly denounced the irresponsible and illegal US-engineered sanctions resolution against Eritrea on the part of the UN Security Council on December 2009. “Such condemnation fully attests to the strong and correct stance of trade unions, the NCEW Secretary General underlined.

The Regional Conference which is being attended by trade unions from Eritrea, Yemen, Kenya, Sudan, Egypt, Italy, the ILO and CEN-SAD would continue tomorrow.