Conference On Ensuring Mother And Child Health Conducted In Keren 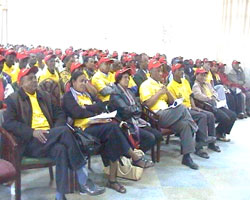 A conference on ensuring mother and child health was conducted in Keren in which over 400 representatives of the people, religious leaders and heads of government institutions participated.

Keren, 22 December 2010 –  A conference on ensuring mother and child health was conducted in Keren in which over 400 representatives of the people, religious leaders and heads of government institutions participated.

The conference aimed at reducing death and suffering of women during pregnancy and delivery. It was disclosed at the conference that making good use of the available health institutions on the part of the society has a vital role to play in realizing the set goal.

Speaking on the occasion, the director general of health service in the Health Ministry, Mr. Berhane Gebretinsae, noted the paramount importance of uprooting harmful practices in the society in efforts to promote mother and child care.

Experts presented study papers focusing on the conventions of ensuring mother safety, the struggle against communicable diseases, the negative impact of harmful traditional treatment, fistula and its consequences, among others. The conference also took note of the factors causing maternal mortality that include failure of scattered villages to be grouped in one community, area remoteness and delays, as well as negligence of relatives during giving birth.

In concluding remarks, the Acting head of the Ministry’s branch in Anseba region, Mr. Kiros Sereke, explained that the Ministry, in collaboration with partners, is working diligently in ensuring mother and child safety. He further stressed the need for administrative bodies and all government institutions to play increased role in preventing mothers’ mortality rate during pregnancy and delivery, in addition to combating fistula.