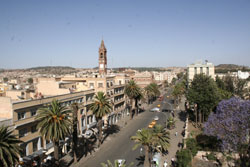 “Many who have glimpsed at the visually-arresting Asmara call it Africa’s most beautiful city due to its innovative art deco architecture, built by Mussolini during his unsuccessful campaign to create a second Roman empire,” is how the “Lonely Planet” website described Asmara, the capital of Eritrea. Lonely Planet ranked Asmara as the fourth nicest city in the world in its travel guide and information published in 2010.

However, the art deco architecture of the city is not the only feature that makes the city unique.  Asmara is also a city of peace and stability and the cleanliness, adding to its uniqueness. Any one who has the chance to visit this city, capital of one of the youngest nations of Africa is surprised to witness the prevailing peace in the city in contrast to other African capital cities. Women strolling alone at 11 PM in the evening, shops opened until midnight with out the presence of a guard or a security camera, are few evidences of the peace and stability the country is enjoying.

Although majority of the buildings in the capital were built during the Italian colonial era in an attempt to create a city similar to Rome, the city was established long before the coming of the colonials to the highlands of the country. Originally, it is said that there were four clans living in the Asmara area: the Gheza Gurtom, the Gheza Shelele, the Gheza Serenser and Gheza Asmae. Later the four clans united and defeated the bandits who preyed on the area. Following their victory, a new name was given to the place, Arba’ete Asmara, literally meaning, “the four are united.” Eventually Arba’ete was dropped and it came to be known simply as Asmara.

Despite the fact that the country was involved in decades of war with colonial Ethiopia, the city has never experienced any damage and the amazing art deco is still standing. Fiat Tagliero, a futuristic fuel station shaped like a plane poised for take-off, the century old Albergo Italia, the first Greek Orthodox Church-St. Mary, the Cathedral located in the center of the city which have bells that ring every full hour and can be heard in the four corners of the city are some of architectural sites.

In its peace about Asmara and the country as a whole Lonely Planet wrote: “For much of the last 50 years, however, Eritrea was embroiled in war with neighboring Ethiopia, first for independence and then over territory. Tensions between the countries remain, but the Eritrean capital is no longer off-limits. Its treasure trove of beautiful buildings now begs for discovery.”

Another aspect that attracts many tourists in Asmara is the habit of the residents of having tea after 6 PM; the time where majority of employees finish their jobs for the day.  At this time, cafes and restaurants of the city are always full and so are the streets with people of varying age groups. There seems to be an unwritten rule of the residents to have tea and relax with the beloved ones after six in the

The Hurdles Of Living In Foreign Lands