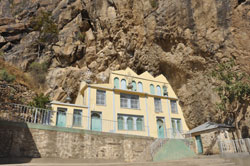 By the time Friday of late October, the day of adventure arrived. The evening before, sitting in the amazing garden of Bahre Negestat hall, our team had undertook one of the most pleasurable thoughts imaginable –that of visiting a number of monasteries in the Debarwa Sub-zone. Hence, next day, we set up our journey at 2 p.m. In the balmy afternoon hours of the subzone, our driver cruised at 70 kms per hour just on the road to Mendefera- Adiqala. Not long, directed by a well-informed guide, we would make a sudden turn to the west heading our way to discover an ancient monastery somewhere in the Guhchea plains.

We managed to reach the Abune Libanos monastery or Aba Meta, the oldest Christian monastery in a hideous dark cave, at 5 p.m.  It is  situated squarely in the tourist corridor deep down a tranquil valley with a breathtaking landscape. It possesses an ancient church in the sprawling forest, somewhere in the walls, on the edge of the cliff.  If one happens to climb and manages to reach the cave safely, one enjoys a familiar church of “Abyssinian architecture”. Wandering far inside the cave one comes head on with a painting of the various Blessed Christian saints and angles. Venturing deep inside the jangle of the valley, one enjoys a quite heavenly scene blessed with an atmosphere of acquiescent stateliness. Sitting under the caves of the monastery just for five minutes, one takes a pleasure in the shower of tranquility and serenity. “The monks have taken the right decision to pass their whole life here,” said one of my colleagues staring at the panorama of the hidings “ The natural melody that reverberates throughout this deep woodland is really a medicine,” said another friend.  They were right to say that. In fact, for me, it was more than theirs; it reminded me of the place we have always imagined, the Garden of Aden.

That blessed moment our team’s mood seemed to have concurred. Our imagination of nature danced in harmony. We liked the place very much. Out of the time scheduled, attracted by the magnificence of the site, the team went on enjoying around the forest.  We stayed there roughly half an hour more time.  A couple members of the team got crazy and ventured far away in a look out for wild fruits. And some others stayed under the cave to bathe their eyes from the holy drops of waters. In an attempt to get some moving shots, our photographer jumped here and there, up and down until he gets the perfect position for a perfect shoot. On my part, I reserved a private moment of composing the melody of nature. I empathized dancing in an imaginary heaven, swaying in harmony with a melodious instrumental music that sounds the lovely music of Far East orchestra. I do not know if the masters of musicology have the analogy for this natural jangle-band. Which artificial musical instruments could be played in place of the songs of the diverse colorful birds that tirelessly banged around the countless nests? Can a box guitar play in place of the kav – kav-kavs of the apes that were swaying in the branches of the old sycamore trees?

The jazz, perhaps, plays in place of the boo, boo, woo of the invisible creatures resounding far from the dark holes and hideaways of the caves. I stopped my contemplation only when a sudden dissonance of sounds showered from somewhere at the top and seemed to be ringing back and forth, alarming the peace, and tranquility of the pretty valley. At first I thought it sounded like apes, but soon I came to know the object when our photographer told me that it was an owl that made the disturbance. As the sun was about to down in the western horizon, masking itself behind Arato Mountain, the bird was probably looking for a perfect hide for the night ahead. After all, the bird was right; Aba Meta seems to have an infinite actors at night. Imagine the place during the night when the dangerous beasts are busy looking for their dishes. Think of the hide and seek of the pray and predators that share the same dreamland.  Danger may come from all sides; any creature can not sleep deeply otherwise its life gone. During the day, however, it is peace. Humans swoop in the valley for spiritual medication only when the sun is available in the sky. Many believe that the monastery, although it possesses seasonal monks, is spiritually and physically linked to the heaven. In the quiet and isolated caves scattered throughout the valley, one can enjoy a perfect spiritual meditation and inquiry. The myth and mystery behind the belief “of a drop of water from the cave of the monastery heals wounds” has for centuries attracted innumerable visitors. Through out the year, on a clear day, guests of all walks of life take a bathe from the Holy Water of the monastery. Visitors have an extraordinary belief especially in the drops of water that indefinitely trickle from inside the rocky roof of the house of worship. Hence, wrapped in legend and history, Aba Meta monastery is the most prominent symbol of Christianity in Eritrea. It is said that the monastery has counted over 1500 years since it inception. According to traditional accounts, Aba Meta arrived here in Eritrea after Aba Yohani, Syrian, who came to this land of Habesha and enabled the spark of the heralds of the Gospel 451-464 G.C.Later on, Abune Libanos, a great churchman who traveled from Lebanon to Eritrea’s southern highlands in 463-260 G.C, preached Christian spiritually in the area. For that reason, he is still known as pioneer eremite of Werk’ Ham and Guna-Guna Enda Meskel monasteries. The Eritrean Tewahdo Christian Churches have also credited Abune Libanos for he was the first holy man to translate the book of Mathew, first part of the New Testament, from Greek into Geeze. Abune Libanos monastery, at the moment, perches in a gorgeous valley at a pinnacle of 2000 meters above sea level. It extends itself in a valley some 2 kilometers away from Adi Bana, the birth village of the world famous athlete, Zerisenay Tedesse. In the afternoon, when the sun downs in the western horizon, the monastery swiftly gets masked under the shadow of the Arato Mountain, which is the regions second highest mountain, standing high just some 3 kilometers away to the west of the monastery.

The magnificence of the monastery is again  pulled out to the east to serve as the main tributary  to region’s biggest dam, the Warsay Dam, which is again some 4 kilometers down  the monastery. Far away to the north of Aba Meta stands high another immensely magnificent Monastery, Abune Endrias, which is just some 40 kms drive to the west of the town of Debarewa. In a panoramically drawn landscape, far to the south of the Leito plains, a single-rocked gigantic monastery appears as a massive porridge ready to serve the creatures of the whole World. It is situated by the side of a profound gorge, but still emerging high touching the sky. When one takes a look of the scenery from afar, he enjoys the view of extraordinary landscape reflecting an immense radiance. Wondering around the monastery, one would feel strolling around a pretty alien town under a glamorous rock.  Here and there around the main church of the monastery, old monks with a long grey beard, and dressed in a black, yellow, and white gowns are seen doing a spiritual practice.  Inside the Church, around half a dozen of them were doing the prayer, “Hammmmmm, Hammmm, ….Hammmm,… Amen. Hallelujah!Far down, about a kilometer away from the temple, a group of women look for a hiding to take a bathe from the Holy Water. Women are restricted to go closer to the temple or venture inside the Monastery. The monks condemn it absolutely. Aba Zemichael of the monastery said: “Yes, women are our sisters and mothers; they deserve the highest respect. They, however, are denied entrance to the monastery for they have the tendency to tempt a monk practicing spirituality. This rule applies also for female animals.” For that reason, monks seem to have the view of “rather stare into the face of a lion than into a woman’s eyes.” On the other side of the monastery, in a variety of caves, a group of teenage monks run the kitchen works that would serve the whole monastery. Every shelter there is a hole in a rock. The dining room, the store, the bed room.., etcetera, is a dark cave. Some others rehearse a spiritual education under shades of trees. This or that, both of the monasteries are worth visiting. They are such a perfect place for tourists who are interested in mountain climbing, and hiking. They are specifically more attractive for bird watchers, photographers and nature buffs.