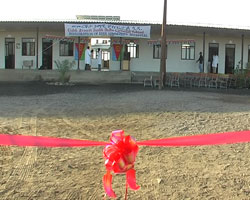 Speaking on the occasion, Ms. Amna pointed out that the Government is making substantial investment towards expanding equitable health service in all parts of the country, besides undertaking intensive awareness raising campaign. As a result, the society is adhering to modern medicine, while at the same time avoiding harmful traditional practices, the Minister added.

She further explained that although encouraging achievements have so far been registered, still more endeavors are required to realize the set goal.

The head of the Health Ministry’s branch in Southern Red Sea region, Dr. Afwerki Berhe, said on his part that the greater portion of the material and professional requirements has been fulfilled in the community hospital, and that the remaining ones would be met soon.

Sheik Mussa Mohammed Mahmoud, a village elder in the area, said that   the care the Government is providing to the people is manifested in concrete deeds. He further noted that the Edi semi-urban center has now become a charming town with the necessary social services.

Also speaking at the inauguration ceremony, the Administrator of the sub-zone, Mr. Isak Ti’um, stated that on top of the newly built community hospital, two health stations are rendering service in Afambo and Bel’ubei administrative areas in the same sub-zone.

Edi Community Hospital has 37 bedrooms, 12 restrooms and 2 ponds with the capacity of holding a total of 72 cubic meters of water, as well as other facilities.