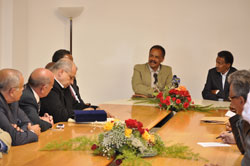 They make up a significant portion of any society. Ever since the emergence of the means of production, their incessant industriousness and ingenuity has revolutionized the entire world. The advent of inexorable technological advances has immensely served none but a handful minority. The workers they employ have now become subject to the consequences of global economic meltdown, as well as unfair preferential treatments. Such state of affairs invokes the need to make a united voice of workers and trade unions heard.

Amid these existing challenges; a two-day regional trade conference held in Asmara at the NCEW’s conference hall addressed varied topics that are aimed at fostering mutual cooperation and social development among trade unions of different countries. Conducting such conferences at regional level would lead   to a common destiny of balanced development in which workers and trade unions share experiences from one another.

Since workers play decisive role in maintaining good socio-economic and political conditions of any given society, they need to be respected. Any subtle and undue way of marginalizing them would only create socio-economically unstable world. In the regional conference that was held from 20-21 December, 2010 in which representatives of Sudanese workers and trade union federation (SWTUF),Egyptian trade union federation (ETUF), trade unions form Yemen and Italy, as well as representatives from ILO,ICATU and CEN-SAD took part they discussed the varied dominations that have been hindering fair and equitable treatment of workers from around the world and particularly workers in the developing countries.

In an opening speech, Mr. TekesteBaire, Secretary General of National confederation of Eritrean Workers (NCEW) ,explained that the Confederation, as  member of the International Trade Union Confederation (ITUC) and International labor origination(ILO) as well as the African Trade union Unity (OATUU) at the regional level,  has been striving to strengthen and expand relations with various parties  and exchange experience.  He also noted that the unjustified sanction imposed on Eritrea on December 2009 was strongly condemned by OATUU, ITUC and other trade union organization, a genuine move that attest to the existing  firm solidarity of trade unions.

In a paper he represented on the conference, Mr. Yemane Ghebreab, Head of Political Affairs of the PFDJ, discussed with the participants that sanctions have been utilized as a means for punishment, intimidation, and domination of the people. In the era of total dominance where violation of workers rights and interferences on economic polices of developing countries occurs, strengthening solidarity of varied workers and trade union organizations is the sole solution to tackle the challenges, Mr. Yemane stated.

Another paper presented in the conference highlighted that aid-driven development programs have been bringing poverty and societal instability in Africa. The paper also discussed that such problems could be resolved through prompting regionally balanced economic development, promoting human and institutional capacities and most significantly developing sound governance.

According to the participants of the conference such conference has come in a very important and critical time. Mr. Ezat Chawri, secretary of Egyptian Trade Union Federation indicated that the regional conference enabled representatives from various trade union organizations to come to Eritrea and discuss a lot of problems that have been causing setbacks in the region. “It is a very good reaction against the domination of the super powers in our region and generally in Africa,” he said.

As regards the role of the trade unions in tackling such challenges Mr. Ezat emphasized that it is in fact an important reactivation for the trade unions to begin to look foreword in developing their own countries through mutual cooperation. “It will enable the trade union organizations find solutions to the political dominations through establishing joint projects. In line with this, Egyptian trade union confederation will start joint projects with Eritrea’s workers confederation through the agreements that would be reached between the two organizations,” he said.

He also puts his remarks on the relations maintained between the ETUF and NCEW as follows: As a continuation of the discussions being held between ETUF and NCEW, we will start a very important exchange of trade union education delegation. NCEW’s high level delegation will visit Egypt by next January and discussions on giving trainers training for farmers and fisher men will be held. Most importantly a lot of joint projects will be started with Eritrea. Eritrea is a very important partner to the Egyptian-Eritrean relationship. We will begin to establish joint ventures thanks to the very good relations that have been maintained. As part of the Joint Commercial projects in Eritrea, a high level delegation of agriculture workers will come by the beginning of 2011. We are taking rapid stride for the Egyptian workers are fully convinced and interested about Eritrea and its good political role. The general trade unions in Egypt are now ready to make direct contacts with Eritrea.

Mr. Stefano Mastrovincenzo, from the Italian trade union on his part said that the cooperation among trade unions has an important role in fostering joint cooperation that lead to development. Italian trade unions believe that international institutions must have a role in resolving the problems in the Horn of Africa. Our participation in the conference is very crucial for our future works and also for the exchange of knowledge and experiences of the trade unions. “Talking these challenges is a timely issue in which all trade unions and workers must work jointly to bring  just and sustainable development through constructive engagements between developing and developed countries,” Mr. Stefano added.

In response to the question whether trade union organizations can bring transformation in some economic and political orders of specific region, Mr. Stefano said that in a situation where there is a free trade union that keeps harmony of the populations, which talks about the justice and rights of workers through promoting participation of the people; it is possible to secure societal development. However, Mr. Stefano pointed out that International financial speculation has been making such progress difficult. But it is important that all the trade unions in the world are now demanding for new world order where workers take control of the financial markets.

Also among the participants of the conference Mr. Mohamed Trabelsi, representative of International Labor organization, ILO emphasized that the subject chosen for discussion is very important for there is strong association with cooperation and development. Cooperation between the states and the peoples is a condition for development.

Mr. Mohamed further highlighted that the conference is very important for the trade unions in Africa, the Arab world and Europe to be together, since trade unions movements are major building blocks of the civil society. We also hope that the African trade union, the Arab trade union as well as international trade union organizations involve themselves to determine the policies of jobs, employment and social dialogue, which is very vital for decent work agenda.

He also throws light as regards to the good ties ILO maintains with NCEW. Last year ILO’s special delegation was here to attend the 30th anniversary of the NCEW. ILO’s regional director will also visit Eritrea to reach an agreement with NCEW and other social partners in Eritrea to plan a program of cooperation.

Workers have become main victims of global economic and financial crisis.  In the discussion he held with the participants of the conference, President Isaias Afewerki said that the economic crisis happening in the west and in other parts of the globe are results of speculation-based economies. The President went on to say that financial institutions have been controlling production, governments have been working in an imbalanced budgets, societies living as parasites of resources of other economies has also produced financial and economic crisis that we see today.

Pointing out that the role of workers and trade union organizations have been undermined and marginalized, which in turn resulted in the existing crisis, the President said that misjudgment of economies, lack of social justice, polarization of societies along the religious, clan and tribe lines has also compounded the economic and financial crisis.

Amid this prevailing situation, the President reminded the representatives of the regional trade unions to go beyond organizing conferences and statements of solidarity and proceed to tangible measures of addressing such crises.