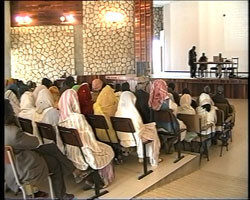 Various development and infrastructure programs have been implemented in Adi-Keih sub-zone, according to reports.

Adi-Keih, 27 December 2010 – Various development and infrastructure programs have been implemented in Adi-Keih sub-zone, according to reports.

In a report he presented at an assessment meeting held at the College of Arts and Social Science, the head of administration and finance in the sub-zone, Mr. Mehari Debesai, outlined the tasks accomplished. These include the construction of Der’a and Kontetefe micro-dams, leveling of land plots, construction of embankments and terraces, undertaking reforestation activities, distributing select seeds, building of schools and implementation of potable water supply project, among others.

He pointed out that a new elementary school was constructed in Mai-Li’en this year which has made due contribution in promoting student participation in education. Encouraging outcome has also been borne in efforts to ensure public health.

Moreover, Mr. Mehari noted that potable water supply problems in 4 villages of the sub-zone  have been eased and that the construction process of Egla-Foro road is progressing well. The road running from Adi-Keih to Umile has also begun rendering service, he added.

Also speaking at the meeting, the Administrator of the sub-zone, Mr. Mohammed Hamid, commended the active participation of the public in the implementation of development programs. He further called on them to further enhance contribution in the effective implementation of the envisaged development programs for 2011, besides making good use of the land plots below micro-dams.

The participants of the meeting adopted a number of resolutions and recommendation highlighting the need for renovating the Adi Keih-Kuatit-Tsorona road, enhancing the introduction of smokeless ovens and speeding up the installation of electricity service, among others.