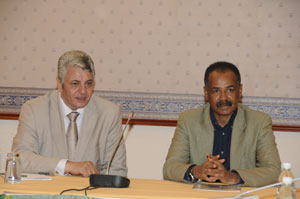 President Isaias Afwerki said that Eritrean-Libyan relations is special and historical, and that it is progressing to the highest level on the basis of cooperation of partnership. The President made the remarks in an interview he conducted today here in the capital with Libyan media outlets

Asmara, 28 December 2010 – President Isaias Afwerki said that Eritrean-Libyan relations is special and historical, and that it is progressing to the highest level on the basis of cooperation of partnership.

ade the remarks in an interview he conducted today here in the capital with Libyan media outlets. Outlining the historical ties between the two countries and peoples, he noted that such relations has strengthened in various domains in the post-independence period. In this regard, President Isaias pointed out that there exists bilateral cooperation of partnership in economic and development programs, besides sharing similar views and stance as regards regional and international issues. He went on to say that his visit to Libya at a time when sanctions was imposed on that country on the one hand, and the strong opposition Libya demonstrated when sanctions resolution was adopted against Eritrea on the other emanates from the special and historical relations between both countries.

President Isaias further explained that failure to finance development programs on the basis of internal resource of a given county exposes to danger its sovereignty and independent path. The substantial investment Eritrea is making on education and vocational training is aimed at ensuring this objective, he added.

Stating that Eritrea is striving to foster relations of partnership on the basis of self-reliance free from aid handouts,  President Isaias pointed out that Libya is one of Eritrea’s main partners in this respect. He further underlined the need for devising effective mechanism so as to reinforce the bilateral relations of partnership for the benefit of the peoples of the two countries.

As regards the role of  the media in development endeavors, the President stressed the paramount significance and power of the media in agitating and raising the awareness of the public, building viable institutions and institutional work methodology, ensuring coordination and complementarity, as well as exposing external interference and exploitation. Moreover, President Isaias underscored the need for laying conducive ground for Africa in order to properly utilize its capacity and resource so that it may become a dynamic partner. In this connection, he noted that the role of the media in nurturing the culture of hard work and productivity is not to be viewed lightly, and that Eritrea could make modest contribution to this end.

Indicating that the prevailing problems in Africa are the consequence of external interference and subservient regimes, the President explained that education remains a potent weapon towards enabling the African peoples combat slavery, exploitation and handouts, and thus become masters of their resources and independent choice.  In this respect, he emphasized the significance of building a potent media in the realization of this goal.

In views the President expressed regarding the confidential secretes leaked by the Wikileaks online network, President Isaias noted that the issue is not something surprising. “For some countries, diplomacy means lies, intrigue and hegemony, and as such an exposure of this type only demonstrates concrete evidence,” he elaborated. The President underscored that the dissemination of the entire secrete documents would lay bare the ploys resorted to in the guise of diplomacy.