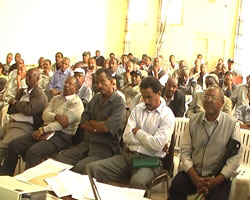 A report presented at the meeting indicated that out of the 36 projects envisaged for implementation, 30 have already been effectively accomplished, while the remaining 6 are in the process of implementation. Noting that 92% of the task of distributing residence identification card (I.D) has been finalized, it pointed out that potable water supply projects have been implemented in the villages of Halib-Mentel, Dembe-Habtestion, She’ib-Seleba and Zien, while the one in Gerbet is nearing finalization. Besides, micro-dams and water reservoirs have been constructed in Dekemhare, Daerotai, Gam, Kerech, Wenjeb and Gizgiza.

Moreover, it was disclosed that almost all development programs have been implemented through active popular participation, and that the activities have created job opportunity for about 3,000 people.

Speaking at the meeting, the regional Administrator, Mr. Gergis Girmai, explained that satisfactory harvest has been obtained in most parts of the region thanks to the close coordination of the people and the all government institutions. He further underlined the need for continuing such close coordination in an enhanced manner in 2011.

Following discussion on the report presented, the participants of the meeting adopted a number of resolutions and recommendations highlighting the need for properly collecting statistical data of the population and cattle, exerting more endeavors to collect and boost government tax, constructing road and bridge along the Elabered-Ber’ona route, as well as building boarding schools in Kerkebet and Sel’a, among others.