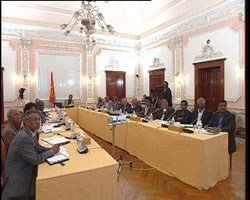 The Eritrean Cabinet of Ministers today conducted a meeting at the Denden Hall here in the capital. Today’s meeting which is the continuation of the one held from December 14 to 15 conducted deliberations focusing on the sectors land, water and environment, transport and communications, finance and national development, as well as diplomatic and media activities. It assessed the tasks accomplished in 2010, besides reviewing the envisaged programs for 2011 and method of implementation along with the requisite budget.

Asmara, 29 December 2010 – The Eritrean Cabinet of Ministers today conducted a meeting at the Denden Hall here in the capital. Today’s meeting which is the continuation of the one held from December 14 to 15 conducted deliberations focusing on the sectors land, water and environment, transport and communications, finance and national development, as well as diplomatic and media activities. It assessed the tasks accomplished in 2010, besides reviewing the envisaged programs for 2011 and method of implementation along with the requisite budget. The meeting also charted future action program of the aforementioned sectors.

As regards the land, water and environment sector, the meeting took note of envisaged programs for 2011 concerning the introduction of integrated management strategy of water resource, finalizing the rules and regulations pertaining to the implementation of water proclamation, preparing proposal on a comprehensive environmental protection proclamation, i.e. land, sea and air, preventing soil erosion and promoting reserve areas and forestation, as well as enhancing wildlife resource. The Ministerial Cabinet meeting also conducted extensive discussion on the revised program dealing with the issue of the right to land utilization, the handling of agricultural plots, tiessa land and the one for residential and business purposes, as well as the price of rented land.

On transport and communications, the meeting closely assessed the envisaged action programs for 2011 as regards the expansion of land transport service through streamlining the public transport system, putting in place infrastructure facilities aimed at reducing accidents, strengthening the competence and efficiency of marine transport institutions, developing marine communication system, ensuring marine security, ensuring the safety of ships and ports, introducing the necessary devices towards preventing sea pollution and the like. Moreover, it held deliberations on the action plan and the necessary budget towards developing postal, telephone, fax and internet services, including that of expanding such services in the rural areas.

The Cabinet of Ministers further discussed the role of the fiscal sector in 2011 as regards budget implementation, ensuring efficient management of government revenues and expenditure, as well as creating favorable atmosphere for trade and investment, as well as upgrading the competence of auditing and supervision staff. The handling of international cooperation tasks was also among the major agenda items in the discussion.  In this respect, the meeting decided that all contacts with development partners should be conducted through the Ministry of National Development which would be entrusted with the task of coordinating the development projects of various government institutions and administrations. Furthermore, it held in-depth discussion on improving the living standard of nationals, especially that of members of the Defense Force and government employees. In this regard, the meeting exchanged views on ways and means of extending different forms of support towards mitigating  the problem of cost of living, and eventually doing away with poverty on the basis of devising lasting strategy.

On the action plan for 2011put forth by the Ministry of National Development, the Ministerial Cabinet meeting held deliberations on gathering statistical data regarding population and national resources, as well as the task of building human and technology capacity towards formulating development plans. Besides, it took note of the work programs focusing on developing a documentation center dealing with issues of economic growth, strengthening GDP calculation methodology, disseminating information about investment opportunities and promoting savings and credit schemes, among others. The meeting subsequently approved future action plan in this domain.
Regarding the work undertaken in foreign affairs,  the meeting reviewed the strong popular, diplomatic and media resolute rebuff waged in 2010 against the unjust and illegal Security Council Resolution 1907 provided vital impetus in strengthening national unity.  In this respect, it mapped out action program aimed at reinforcing the national resolute rebuff and enhancing the participation of Eritrean citizens abroad in political and economic activities in the Homeland. Assessing that regional developments are assuming very volatile trend, the meeting reached understanding that Eritrea’s modest contribution for regional stability should continue on the basis of its correct stance and constructive engagement. In connection with global diplomatic activities, the Ministerial Cabinet approved the work program charted towards further expanding diplomatic relations and trade activities with the countries of the Middle East, the Arabian Gulf, Far East, Europe and others, as well as regional and international organizations.

On media works and the progress made, the meeting reviewed the changes so far witnessed in developing infrastructure facilities and technical competence, as well as expanding coverage. In this connection, the Ministerial Cabinet meeting stressed the need for keeping intact the accomplishments so far registered and conducted extensive discussion on the work programs for 2011 on further upgrading the quality of programs transmitted via media outlets, strengthening and expanding transmission capacity and coverage, launching the process of transformation towards High definition, setting up national information center, building human resource capacity, establishing regional and international media organs and fostering relations with various media establishments. Furthermore, the meeting took note of the envisaged programs focusing on colorfully celebrating the 20th anniversary of Independence Day, as well as other national and public holidays, in addition to organizing symposiums on the documentation of the national achievements registered over the past 20 years.
Following the comprehensive summary and work directives which President Isaias Afwerki presented sector by sector, the Cabinet of Ministers concluded its day-long meeting adopting significant resolutions.