Coordinated endeavors for better output in 2010 to be reinforced next year: Regional Administrator 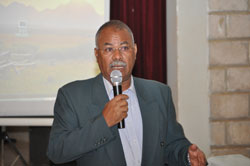 At an assessment meeting conducted in Mai-Mine sub-zone, the Administrator of the Southern region, Mr. Mustafa Nurhusein, said that the coordinated endeavors for better output witnessed in 2010 need to be stepped up in the coming year.

Mai-Mine, 30 December 2010 – At an assessment meeting conducted in Mai-Mine sub-zone, the Administrator of the Southern region, Mr. Mustafa Nurhusein, said that the coordinated endeavors for better output witnessed in 2010 need to be stepped up in the coming year.

A report presented at the meeting indicated that new schools at the elementary and secondary level were constructed in 2010 in the sub-zones of Senafe, Segeneiti, Tsorona and Areza. The number of students rose to 40%, while the result in the national Grade 8 examination showed an increase of 77%, it was disclosed. Moreover, distance learning program aimed at upgrading the professional competence of teachers has been introduced, the report added.

Following the expansion of irrigation farming and application of modern methods, satisfactory production output has been registered in the agricultural sector, and that the process of fish breeding in the micro-dams of Unafer’o, Sesewe, Adi-Nifas, Bidho, Dirko and Mai-Aron respectively has made encouraging progress, according to reports. Besides, farming activities below the aforementioned micro-dams is assuming encouraging trend.

The report went on to highlight the concerted action being taken to prevent the cutting of trees and renovate the Igila-Foro road along with building support wall, while the Adi-Keih-Umle road has already began service.

The participants of the meeting put forth a number of recommendations on registering still greater accomplishments in various domains in the New Year.

In a speech he delivered at the meeting, the Commander of the Central Command, Maj. General Omar Hassen Tewil, noted the vital role of coordinated endeavors on the part of the people and Defence Force members in reinforcing development programs and national production output. He further called for stepped-up efforts so as to improve the people’s standard of living.

Also in concluding remarks he made, the Administrator of the Southern region, Mr. Mustafa Nurhusein, pointed out that the erection of electricity poles in villages, human resource development, land leveling and fish breeding in micro-dams are among those programs envisaged for implementation in 2011. He further stated that the regional Administration and the inhabitants are determined to exert still more efforts for gratifying outcome.

Giving Gifts During The Holidays